I am sure, by now, you have seen the recent news regarding the terrible earthquake that hit the hill towns of Amatrice, Accumoli, Pescara del Tronto and Arquata del Tronto.

This was the third earthquake we've felt since we've lived in Italy, and we've been hundreds of miles from the epicenter each time. I can tell you, the shaking is scary. I can't even imagine what it would be like to be right in the middle of it.

At around 3:35 am on Wednesday morning we felt the bed move. It moved. Side to side.  We both said, "What was that?"  On occasion, when a large ship passes by our apartment, we feel some vibrations. We're that close to the water and we're talking large cruise ships. This wasn't that kind of vibration. And because we'd felt the shakes of two previous earthquakes, the last one being the large one in Aquila in April of 2009, we already knew what we were experiencing.

Mike grabbed the flashlight on the night table, focusing the beam on the chandelier above us. It was swinging in an arc of about 10 inches in each direction. That's some pretty good movement. Fortunately, it is not centered over our bed, or I would have been running! It's an old Murano glass chandelier, a bit over 3 feet in height, constructed of quite heavy glass. And it was swinging merrily above us. We both said "Earthquake" at the same moment.

We didn't panic, we could tell the epicenter was far enough from us. After a couple of minutes, the chandelier settled down.

I then picked up my phone and checked Facebook. Sure enough, a friend in Cannaregio had posted she felt it also.  I have no idea how I would function without Facebook. Can you imagine, an earthquake of 6.2 magnitude hits, and the first thing I do is check Facebook. What is wrong with me?

Shortly after the news feeds reported the location and severity.  We went back to sleep.

As the morning hours ticked by, the news reports worsened. The numbers crept up. The photos were frightening. I couldn't stop looking at  the news, even though I didn't want to watch.

Weird that the town clock stopped ticking, frozen in time, at 3:36 am.  Weird, also,  that this earthquake happened at the same time of day, within minutes, of the one that hit Aquila a few years earlier.  More sad than weird is that Amatrice was preparing for it's big Festa coming up this weekend, the Sagra dell' Amatriciana, the famous spaghetti dish named after this hilltown. Tourists were already in town for the event.

Last night in my English lesson with my student Francesco we discussed the earthquake. He had just returned to Venice 2 days ago after having been on vacation in the same region. Talk about luck. He'd have been right smack in the middle of the earthquake. Much of our lesson was spent fixing his pronunciation of the word. By the end of the hour, he'd moved from "Hearth-quick" to a much better "earthquake".  I hadn't planned for this to be the topic of our lesson. Funny how things just happen.

I returned home thinking how lucky we all are. We're still here. Our homes are intact. In the blink of an eye, 200 plus people have lost their lives, and thousands are in makeshift tents wondering what happens next.  And this is just another reminder of how precious life is. My mantra over the last nearly 10 years has been this:  Tomorrow isn't guaranteed. All I know for sure is that I have this moment, and it is up to me to make the best of it.

If there is a lesson for us out of disasters like this, I think it's this.  Make the most of each day. We don't know if we will have tomorrow. Leave with no regrets. And, love. Love well. Tell the people you love that you love them.

In Italian, I would tell you all " Ti voglio bene".  Used for family and  close acquaintances, this is a step down from the full blown  I love you, "Ti amo".

In honor of the people of Amatrice, we're making their signature dish this week. We're using Mario Batali's recipe ( http://www.mariobatali.com/recipes/bucatini-allamatriciana/)


Bring 6 quarts of water to a boil in a large pot, and add 2 tablespoons salt.

Meanwhile, in a 10- to 12-inch saute pan, combine the olive oil, guanciale, onion, garlic, and re pepper flakes; set over low heat and cook until the onion is softened and the guanciale has rendered much of its fat, about 12 minutes.
Drain all but 1/4 cup of the fat out of the pan (and set aside to cook you eggs for tomorrow's breakfast). Add the tomato sauce, turn up the heat, and bring to a boil, then lower the heat to a simmer and allow to bubble for 6 to 7 minutes.

While the sauce simmers, cook the bucatini in the boiling water for about a minute less than the package directions, until still very firm; drain.

Add the pasta to the simmering sauce and toss for about 1 minute to coat. Divide the pasta among four heated bowls and serve immediately, topped with freshly grated pecorino.

During the coming days and months, the people of Amatrice and the surrounding towns affected will need support. The Florentine, a local newspaper in Florence, has compiled an excellent list of  ways we can help, including everything from donating blood to attending events which are making matching donations.  Here's the link.

What a difference a year makes!

I'm thinking I need to dedicate this blog to my Italian teacher, Francesca, who works with me tirelessly every week.

One year ago, I had a conversation on the beach at Lido with the woman I have nicknamed La Contessa. Looking back on that conversation I am mighty embarrassed, because my ability to get a decent conversation out of my mouth was nearly non-existent. I was talking Italian baby talk!

Flash forward to this morning.

My morning ritual on days when I get to the beach is to set up my chair, spend a few hours enjoying the sun and surf relaxing, then pack up to head home. On my way off the beach I stop for a coffee at the bar at our beach.

Today, I reversed my routine, stopping first for that coffee.  I carried my cup to my usual table and discovered La Contessa and a group of friends were also having coffee at the next table. I hadn't been there in a few weeks due to a nasty cold, so hadn't seen La Contessa since the last visit. She introduced me to her friends, and we proceeded to get into a lively conversation about a variety of topics.

Just thinking about the range of topics has me laughing still now, hours after having come back from the beach. La Contessa had recently read a book in Italian called A Brief History of America, or something like that, in which she learned about the settlement at Jamestown, and the war of 1812, and the Civil War. She commented that of all the American presidents, she likes Lincoln. So we talked about Lincoln. And Jamestown. Jamestown, of all things! 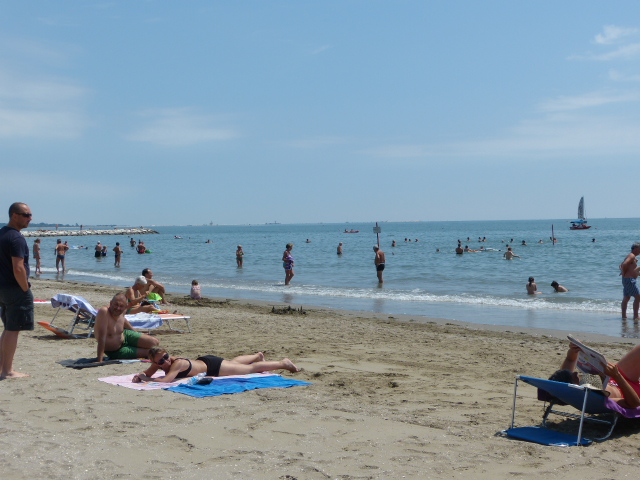 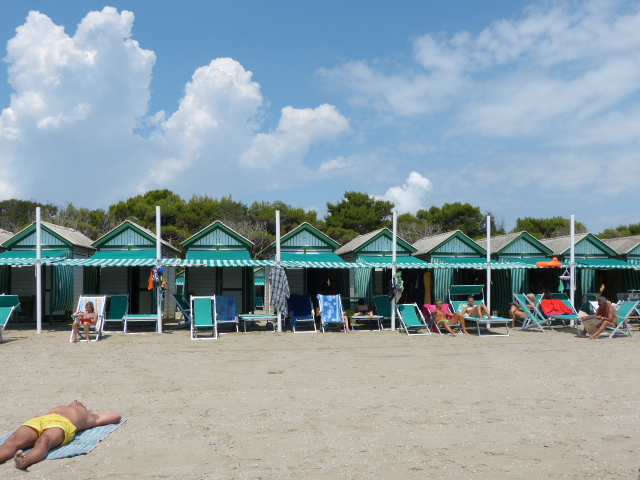 The Lido coffee bunch had an assortment of questions for me. Tops on the list, of course, were all things Trump. Seems I can not avoid that topic anywhere these days, although I would love to. I got asked about food in New Orleans, the weather in Seattle, and the mafia in New Jersey.  Cracks me up.

But what amazes me even more than the choice of topics is that I am holding my own in these conversations this year. Not bumbling, but actually getting  information shared, thoughts conveyed, opinions expressed.

Language-wise, it's a whole different year. Karen is happy.

So, thanks Francesca, for tolerating me, pushing me, encouraging me and never giving up on me.