It's been HOT,  and we've been busy, busy, busy, but NOT too busy to celebrate Redentore!!!  As you may know already, Festa della Redentore is probably the biggest festival in town. Venetians have been celebrating this holiday since 1577, first held to celebrate the end of the terrible plague years and the construction of the Church of the Redentore (the Redeemer). The holiday begins with a procession across the Giudecca canal on a temporary pontoon bridge led by the Patriarch of Venice.  A special mass is held in the church, followed by merriment and LOTS of food consumed canal-side, in anticipation of the evening's fireworks which commence at 11:30 pm. The weekend long celebration ends the following day with gondola races in Giudecca canal. 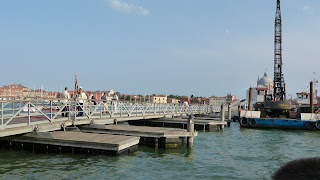 We waited along with the rest of Venice, it seems, alongside the fondamenta, at 7pm on Saturday evening waiting the opening of the bridge.  Just before 7 we caught a glimpse of the new Patriarch Francesco Moraglia arrive by boat and make his way to the area on the bridge where Mayor Orsoni and a crowd of others awaited him. The crowd got impatient as 7pm came and went- everyone wanted to get across the bridge!  Finally, almost 10 minutes later, the red, green and white ribbon was cut and the masses made their way across to the foot of the Redentore church. 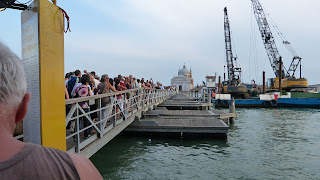 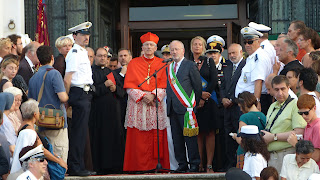 I caught a few minutes of the mayor's speech given at the doorway of the Redentore just prior to the mass. We didn't attend mass, instead we stopped at a vendor's stall along the street to buy some candied pecans, then made our way down the fondamenta towards the other church, the Zitelle, on our way to our destination for the evening- the home of our friend Caterina and her family, who own an old squero (gondola boat yard) on Giudecca. 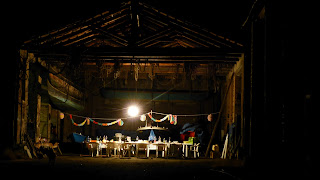 We couldn't have asked for a better location to spend this special event!  In previous years we've sat along the street along the Giudecca to watch the fireworks, and always wished we could be included in some family's celebration too. We'd always been envious, watching from afar, as the families and groups of friends gathered along the waterfront to celebrate, eating vast quantities of food! This year we got to experience a Redentore like we had always hoped for- and alot more!

We all brought food to share, and there was no shortage of either food or drink. However, the highlights of the evening were the bovoletti ( small snails) made by Caterina's mom, and the tiramisu made by Caterina herself! 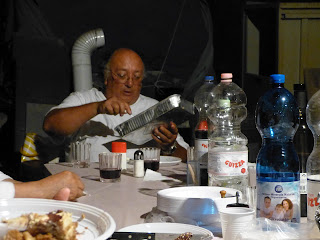 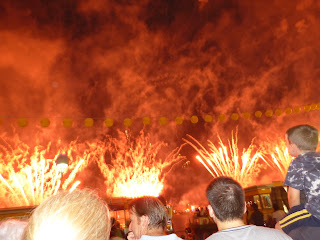 Dinner being consumed, we made our way back to the fondamenta just in time to catch the first of the fireworks going off. We were in a great location, just ahead of the vaporetto dock at Zittele.  Way better location than we'd had in previous years.  Normally, there are thousands and thousands of boats decorated with paper flowers and lanterns loaded with people moored in the lagoon in front of the temporary bridge. This year, the city decided to pass a new regulation banning the use of transport boats to hold people during this celebration, and announced fines would be levied for any violations.  So- far fewer boats this year. A little disappointing, unfortunately. 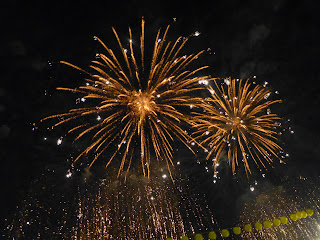 Not only was our location better, the fireworks display was the best at Redentore we've seen. Absolutely spectacular!  I've said this before, and I will say it again now- no one does fireworks like the Italians do!  This was pyrotechnics at it's finest.  Somewhere around 2 am we made our way back home amidst throngs of happy Venetians, and a very happy Karen. 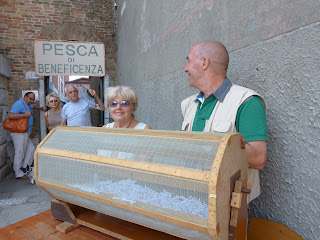 The Redentore celebration continues the next day- and so did I.  I met up with Caterina and her mom to attend the Pesca di Beneficenza at the Redentore church. But first, we stopped into the church to catch a bit of mass. Pesca di Beneficenza is a lottery type game, proceeds going to the church. It was explained to me that everyone wins something, and some of the prizes are very good.  I handed over my 5 Euros, for which I received 5 little pieces of paper all rolled up.  With great anticipation and tickets in hand, we walked into the next building where all the prizes are lined up on shelves for display. Caterina and her mom explained the process- first, I unroll all my little pieces of paper. On each piece is either a number or a word. I hand over the papers to the kids running the booth and they hand over my gifts. My little pieces of paper all had words on them - not good, Caterina's mom tells me!  I came away with a plastic spaghetti strainer!!!!  Caterina got a bottle of white wine.  Proof positive that I have no luck! 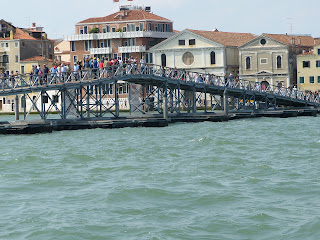 The temporary pontoon bridge is up all day Sunday as well, for people to enjoy walking back and forth.  Sunday afternoon Mike and I were invited to have lunch with Caterina's family again.  Her mom made a delicious spaghetti with mussels, after which we had snails, a variety of cheeses, prosciutto, melon, bread, and fresh peaches. Her dad, Guido, broke out the grappa and Fernet Branca, an herbal liqueur that tastes like bad cough medicine and weeds, (myrhh, cardmom, camomile, aloe, rhubarb and saffron).  Good lord, how could anyone drink this???? 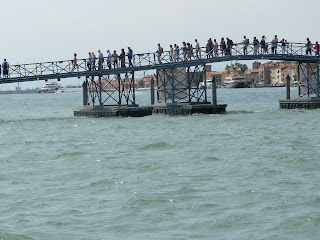 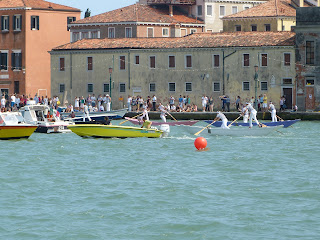 Last event of the big weekend is a series of regattas on the Giudecca canal, beginning with a race for children in twin oared pupparini's, ending with two oared gondola races. 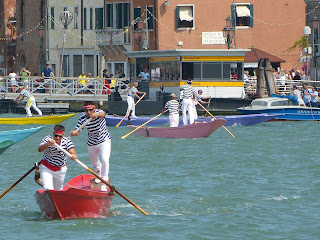 All in all , Redentore 2012 was the perfect weekend. Lots of good food, surrounded by good friends and family. It's already marked on my calendar for next year!