For the last four months, my Wednesday routine includes trotting off to Cannaregio for a 6pm English lesson. My student, Francesco, is a lovely Venetian man who is fairly competent with the English language, however doesn't have much opportunity to keep up with speaking it. Thus, the weekly conversations. We talk for most of the time, spending the other portion reading an excerpt from a newspaper or magazine. Recently, upon suggesting he read a book, he jumped up and pulled a book from his book shelf.  This book: 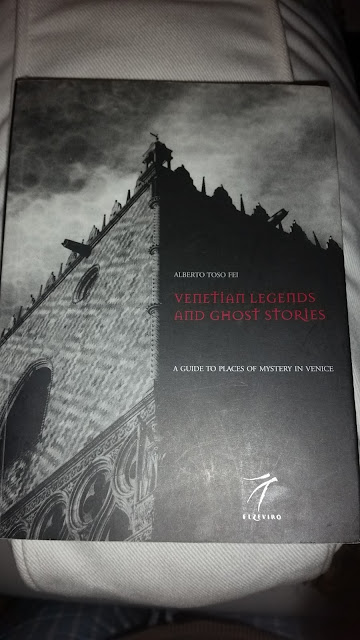 I love this book. In fact, I love all of Alberto Toso Fei's books. If you are a lover of Venice you probably have already discovered his many fascinating books with stories of unique spots and happenings in a Venice of an older time. At any rate, Francesco had never opened the book before. So together we cracked it open,  I selected a short excerpt and he began to read.

The problem with this book for Francesco is that it is originally written in Italian which has been translated into English.  It's a complicated read because the sentence structure is Italian. What he needs is a book written in English, not translated into it.  But more on that a bit later.

The story we read describes something that happened in Campo San Giovanni e Paolo, on the northern end of the Castello district.  Francesco, who has Venetian grandparents and has lived in the city as an adult for more than 20 years and also spent much of his childhood here visting his family, did not know this story.  I had read the book years ago so was familiar with the story.  I'm in Campo San Giovanni e Paolo often, but it's been ages since I went to actually look at the site of this particular episode Alberto Toso Fei describes. The other day as I walked through the campo, I took time to search more carefully. 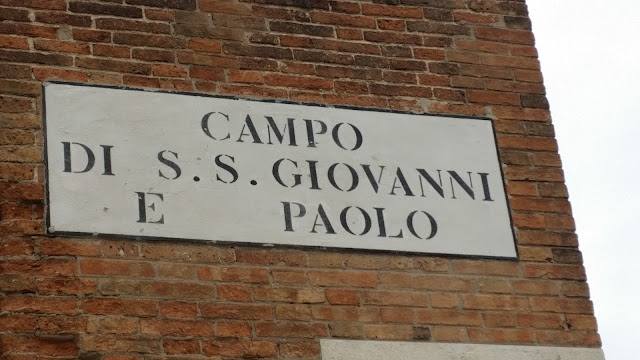 Campo San Giovanni e Paolo, named after the Saints John and Paul, is one of the largest and most important campos (neighborhood squares) in the sestiere (district, in Venetian dialect) of Castello.  It's a popular spot for locals and tourists alike. Tour groups flock to this campo to see the famous statue of Bartolomeo Colleoni, the church of San Giovanni e Paolo, and the magnificent Scuola Grande di San Marco.   The campo is also known as Zanipoli, in dialect for Giovanni e Paolo


Since the end of the 1500s the funerals of all Doges took place in this church, and inside you will find the tombs of twenty-five Doges. One of Venice's most historic and impressive churches.

Alongside the church you will find the Scuola Grande di San Marco, with it's exquisite marble facade. And it's this building that figures into the  subject of the story.  But before I go on with that, look carefully at the following photos that show some of the detailed carvings decorating the front of the building.


He ran screaming into the canal and drowned.

Rumor has it you can still hear his desperate screams in the campo as he searches for his mothers heart.

Cespo Pizzigani,the stonecutter,  who was sitting in the shadows by the Scuola doorway, made a sketch of the event he witnessed that night. 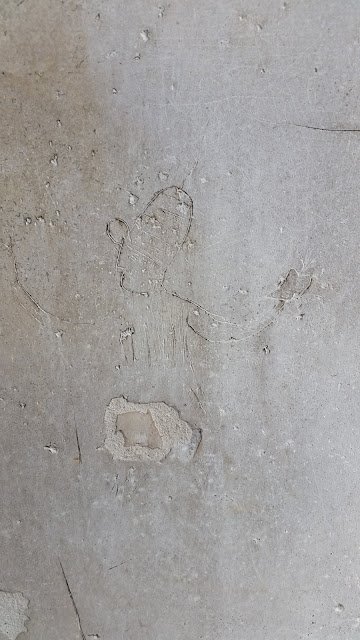 Look closely. You'll see a man in a turban, holding a heart shaped object in his hand. This etching is on the doorway as you enter the main door of the Scuola Grande di San Marco.

Over the years I've enjoyed tracking down many of these little obscure yet fascinating stories from Venice's past. They make this city come alive for me.

Now back to my student, Francesco. We read a few stories from Fei's book. Fun for me because in addition to helping him with his English, these stories were new to Francesco.  Unfortunately, the language of the book in the English translation is difficult.  So we put that book aside.

I've taken him a copy of a Donna Leon book! Written in English by a native American English speaker, Donna Leon writes mysteries set in Venice.  I'll get Francesco learning about this city yet!

*Story of the man with the heart from Alberto Toso Fei's Venetian Legends and Ghost Stories, A guide to places of mystery in Venice.

It's summer, it's hot, and it's festa time. We've had the Festa di San Antonio at San Francesco della Vigna, followed by the Festa di San Pietro at San Pietro di Castello, and coming up this week is the Festa di Beneficenza at the Church of San Giacomo dell'Orio. All big deals every summer, and if you are here in Venice, these are events not to be missed. But... the best of the best is coming up this weekend, Festa del Redentore, otherwise more commonly referred to as simply Redentore.


Redentore is a hugely important event for all Venetians.  It's a weekend-long festival that has been held each year since the Church of the Redentore was opened after the horrible plague of 1576.   Remembering the end of the plague when over 50,000 Venetians lost their lives, Venetians make a pilgrimage over a special bridge crossing the Giudecca canal to attend mass. In the early years, they crossed the canal over boats that were lashed together. In modern times,  city engineers construct a temporary pontoon bridge thousands walk across during the weekend. And today, Redentore is the biggest party in town.


The temporary bridge is floated down the canal in sections about a week before the event begins, and during the week it is placed into position. The other day as I was passing by on the vaporetto I could see portions of the bridge being worked on already.


It's not only the bridge construction that has started early. It seems everyone is abuzz over Redentore. Where are you eating, who are you eating with, what are you bringing? The anticipation for Saturday night's events is running high.  In addition to going to mass at Redentore on that Saturday evening, it's also a tradition that you eat your dinner canal side with family and friends while you wait for the midnight fireworks to begin. Every conceivable square centimeter of land on both sides of the Giudecca and from St. Mark's all the way down to my neighborhood in Sant'Elena are occupied by tables full of Venetians eating, drinking and celebrating.

Yesterday I noticed the first of the reserved spots in place along the Fondamenta by Via Garibaldi.
You can make reservations ($$$) for a place on a big party boat to drink and dance all night  out in the lagoon to watch the fireworks . You can make a reservation ($$) at many of the rooftop bars for a good viewing post (Hilton, Danieli, Gritti Palace for example).  Or, you can do what the locals do and take your duct tape or masking tape down to the fondamenta and stake out your own space. Reservation = free!

By Thursday night there won't be any space left that hasn't been put on hold using the tape method. My student Francesco described how he and his friends handle reserving their spot. They go out on Thursday to mark the location. All day Saturday they take 1 hr shifts standing guard to ensure no one else rips up their tape to take the spot over for themselves.  Sorry, I just can't imagine doing guard duty on my Redentore space. But, you gotta do what you gotta do,  I suppose.

This year once again Mike and I will be joining several Lioness families canal side near Via Garibaldi. We're honored and overjoyed to be included. The eating will commence around 7 pm, with course after course after course of delicious local specialties such as stuffed duck breast, sarde and soar (sardines marinated in onions), bovoletti ( tiny snails),  and grilled orata to name just a few. Eating wraps up just about the time the fireworks start, and we're almost too stuffed to waddle back home afterward.

What am I bringing?  Watermelon (anguria) and a cake.

Have you been to Redentore ?  I know summer is a very crowded time here in Venice, but if you have not had the opportunity to experience Redentore, it's worth putting on your list. It's the best fireworks I've ever seen in my life. Italians do several things really well, and fireworks are one of them.

Redentore - right from your own home


You too can enjoy the spectacular Redentore fireworks right along with all of us on Saturday night. Remember, they will begin at midnight, Venice time.

P.S.  You might also want to check out my blog "How to enjoy Redentore like a local" for some great insider tips. This blog contains one of my favorite  photos of Redentore from back in the days when the boats were used to cross the canal. Don't miss that one!
Click here to read.

Venice from inside the boat

I've very excited to share some of my latest adventures with you.

Recently I received a GoPro camera as an early birthday gift from a group of fabulous friends so I could record some of my rowing experiences.

Last week I strapped the camera to my head, got in the boat and went out for the first live test run.

I filmed our entire exercise session, from getting into the boat to pulling it up out of the water.  The video clips are unedited.(It was my first attempt at this. Just getting them up into YouTube was a learning curve)  But I thought you might enjoy seeing Venice from my perspective in the dragon boat on last Wednesdays row.

There are 6 clips- with each of the first 5 lasting 12 minutes and the last 5 minutes. Grab a paddle and come on along with me. Or, if you prefer, grab a glass of prosecco instead, and enjoy a bit of Venice with me.

Hope you enjoyed this as much as I've enjoyed sharing it with you.

P.S. If anyone has any GoPro tips or tricks, this novice would love to hear them.
Posted by karen at 1:36 PM 13 comments: