Laundry here has been one of my biggest adjustments. I'll admit it- I'm a clothes dryer girl. I like my towels warm and fluffy. I really love my blue jeans soft. But-- we have no clothes dryer here. There's no where in the apartment we could even squeeze one in. I have no idea why everyone here in Italy hangs their clothes on the line, but it appears they all love it. I'm sure people could have dryers, but no one does.

I have a love/hate relationship going on with clothes pins. I just can't seem to get through one laundry day without clothes pins falling out of the little bin, falling all over the ground, and even worse, falling off the clothes I've pinned them on. It seems simple enough, but for some stupid reason these pins just don't like me. I am beginning to think it's all because they somehow know I crave a clothes dryer.

More often than not, in the US, I'd leave clothes washing for a weekend day, and get it all done then. A couple of loads of laundry, toss them in the dryer, and bing, bang, boom, laundry is done.
Here, I can't leave the laundry till the end of the week. I'd never get it done. Why? Because my washing machine looks like it's a Barbie washer. It's got teensey tiny capacity, as do all the washers here that I've seen. Besides that, it takes hours for one load to be done. It seems to have a million different cycles, going in one direction, then backwards, then fast, then slow. Who knows what it's doing in there.

This morning, I had to put a load of sheets in. On laundry days, it's critical that first I check the day's weather forecast. It never fails that I will hang out laundry and then it starts to rain. Today things appear to be ok rain-wise. I washed the sheets, walk out the back door to the clothes line, and notice there is a large plastic bag on the porch. That's weird. I picked the bag up, and noticed a note taped to it. The note read " Please can put my yellow towel in. Thanks, Betty B.".

I'm laughing out loud now. This is another classic example of why I love my life here.

Not only is there a bag with a note, but I also notice there is a string hanging down to my doorway from the apartment window two flights up. Now this all makes sense. A few days ago we found a yellow kitchen towel on the ground in our garden. I'd washed it and hung it on the line yesterday. Today, the woman upstairs is asking for her towel returned, with the bag retrieval system!! She knows we don't speak much Italian, bless her soul, she's managed some pretty good Inglese for me!

I folded the clean towel, placed it in the bag, tied it onto the string, and attached my own note inviting them down for wine in the garden so we can get to know each other better!

Gotta love laundry days!! I would never have had this experience back in Baltimore in the basement with my clothes dryer.
Posted by karen at 4:45 AM 3 comments:

The Italian National Health Service and the magic Tessera card

(No, this isn't the next Harry Potter book, although the title is a good one for it, and ... I could have used Harry and his wand on this adventure!!!)


Now that we've gotten completely through the incredible administrative maze which is required in order to obtain your health insurance documents here in Italy, I can sit back and write about that whole adventure. This was ALMOST as daunting as obtaining citizenship. Almost. At least we had some previous experiences to draw on, we were somewhat prepared for another nightmare. I don't know why, I just thought this would be easier. Ha, what was I thinking. I should have known by now.


I checked the phone book to be sure I knew the location of the office I was supposed to go to. This looked easy enough, the office was in the Ospedale (hospital), and I know how to find that. I gathered up all our documents, and off we went. Once inside Ospedale, I had to ask a few people where to go, finally one nice man took us to an office labeled "Communications". Oh well, this didn't seem exactly right, but we're game.


Inside, a woman stopped what she was doing to talk to us. She looked at my documents, and then proceeded to explain to that she didn't think we qualified for the health insurance. Not being able to speak alot of Italian was quite a disadvantage in this situation. Three times I pointed out that my Carta d'Identita says "Italian citizen" written on it. On the third try, she finally got it, at which point she became alot nicer. She printed out a map showing us the place we should have gone to, and also some additional information about the Tessera card. Ah, yes, the Tessera card. That was the end goal-- obtaining the Tessera. 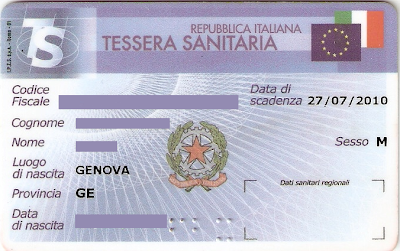 This little baby is like having the gold wrapper of the Wonka bar. Once you have this Tessera card, you are good to go. But, we discovered, nothing is ever easy.


The next day we gathered up our documents once again. It takes a good bit of nerves to deal with these beaurocratic issues, and I have to gear myself up for it. I was ready--we headed off to the office in Dorsoduro where we had been redirected. It appears there are local offices in each health district, depending on where your residence is, and you must handle all of your transactions in the appropriate district. We needed to get to a large building known as Ospedale Giustinian. Once in the building, we found the main reception desk just as you walk in. Here a man pointed us to an office around the corner and down the hall.

We had to take a number, then wait our turn, along with the slew of other Italians on the bench. There are two offices here, one for making Prenotazione (appointments), and the second for all other issues relating to your Tessera. Once our number was called, we went inside to one of the counters and showed our documentation to the girl behind the glass wall. She didn't speak much English, but tried hard. What we got out of her pretty quickly is that she didn't think I qualified for the Italian Health Insurance either. Again, I pointed to the line on my Carta d'Identita that reads "Citizenship = Italian". Ahhhh... finally she got it, and became very nice to us. Bada bing, bada boom, she has typed a bunch of stuff into her computer, and printed out a paper card which she handed to me. She also handed me a copy of the plastic Tessera card I would be receiving in the mail. It's as if I had waved a magic wand over her. I love this Carta d'Identita already. After today I have learned to make sure I point out where it says I am an Italian citizen FIRST. That's the key.

A few minutes later, she did the same process for Mike. After all was said and done, we still had two hurdles yet to handle. A) we needed to return to this same office with the final certificate of residence documents for each of us, and B) Mike needed to bring back his permanent Carta di Soggiorno when he received it. Until that time, we had Tessera's that were only good for 3 months. Alright, at least that's a start.

Two weeks later, our plastic Tessera cards arrived in the mail, and we're feeling pretty good about having gotten this far.

Another mission accomplished, we're in the Italian Health System.
Posted by karen at 6:53 AM 5 comments:

We noticed a poster advertising the 3rd annual Carcofi festival on Sant 'Erasmo, and I thought it might be interesting to go see what it was all about. It was on a saturday that we had nothing planned, so I put it on the calendar. I got out the vaporetto schedule, determined we needed to take the # 13 from Fondamenta Nuova to Sant 'Erasmo, and worked out that if we left Piazzale Roma on the # 41, we could switch boats at F. Nuove and get out to Sant' Erasmo around 10 am.

Sant Erasmo is a small island just off Burano. It's all farmland. Vegetables and fruit sold at the Rialto market are all grown here.

We set off from Piazzale Roma and changed boats at Fondamenta Nuova. The boat ride to Sant Erasmo is about 30 minutes, with a short stop at both Murano and Vignolo first. We got off at the Cappannone stop on Sant Erasmo, the first stop on the island. I wish I had taken a picture at the dock. You get off the boat, and you see a small refreshment stand to the left, a row of bicycles, some cars and motorcyles in a small parking lot. In front of you is open land, and a pathway. We didn't rent a bicycle. perhaps next time. We stopped for a drink and snack, and set off walking. We didn't have a map, and we let the other people on the boat take off ahead of us. We just ambled for a bit.

We made the bend in the road, we could see water off to our right, and farmland all to our left. Before long we spotted what we were eager to see.... artichokes!

The artichoke plant took us by surprise, we had never seen anything like it. These are the smaller type, purple in color. They were growing in large patches that seemed almost wild. 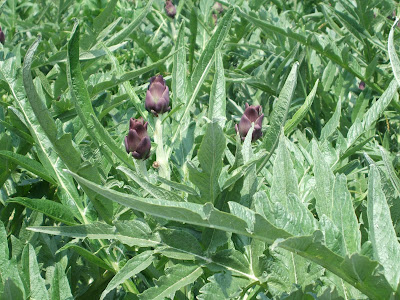 I'm posting a few pictures so you can get a little tour with us. 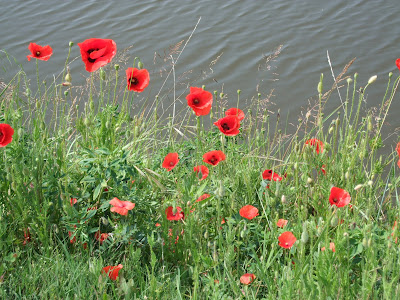 Poppies and other wildflowers were in abundance as we walked along the road. This was a treat, a far cry from what we see day to day in Venice. 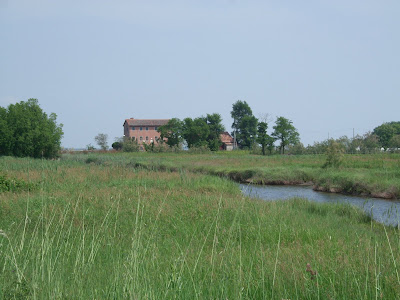 There are little canals cutting through the fields and large houses here and there. 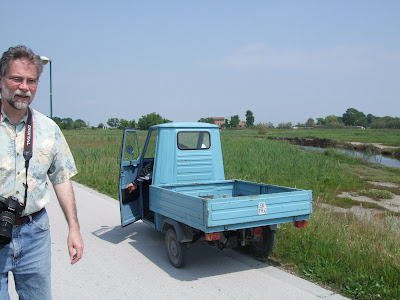 I haven't seen one of these since we were in Tuscany a few years ago. This 3 wheeled little truck is called an Ape (which translates to " the bee" , I believe). I want one! You can see how little it is, compared to Mike walking next to it. 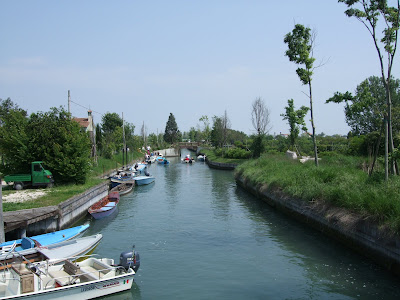 Even here on Sant Erasmo there are canals. We didn't have a map, no way of knowing how many canals there are. This one in particular had alot of boat traffic on it, but still it was quiet and idyllic. 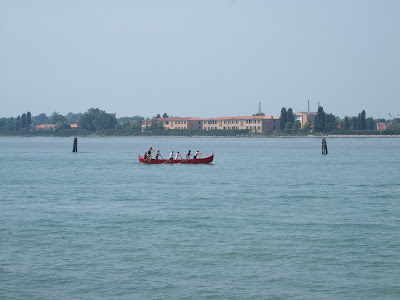 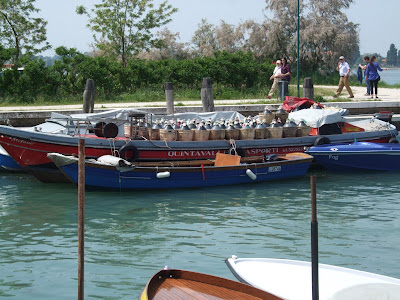 This boat is filled with wine jugs coming straight from a vineyard. We love seeing these pull up! 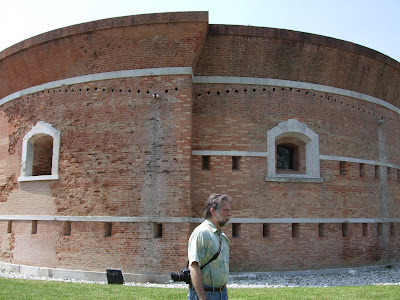 The Fort of Maximillian on Sant'Erasmo 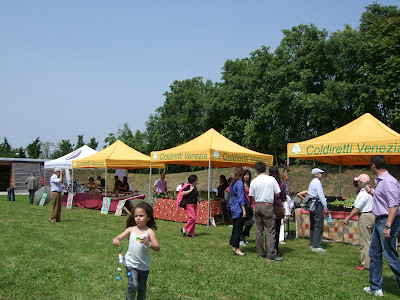 Vendor stalls and exhibits set up for the Carcofi Festival. You could buy fresh artichokes and other vegetables, or sample some freshly cooked. 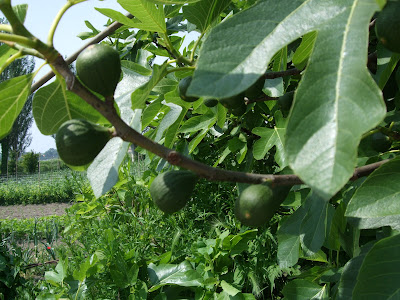 Figs on the vine.. mmmmmm. 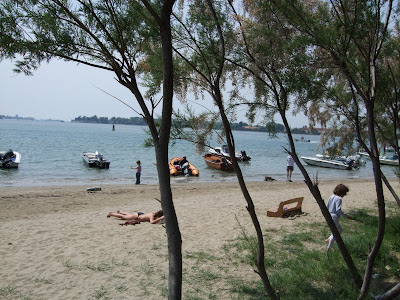 We ended our walk at a little bar at this end of the island, and discovered a lovely beach. 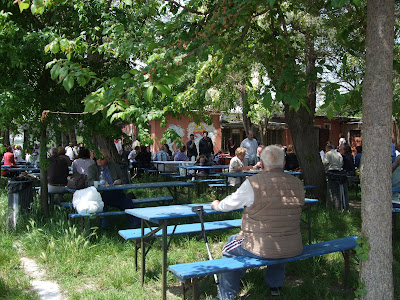 The bar served food and wine, and had great outdoor seating with beachfront view. Can't get more authentic than this! We enjoyed fritto misto, sauteed artichokes (of course), homemade gnocchi and prosecco wine. I'm already planning a little beach getaway one afternoon, now that I have discovered the perfect spot!
After a leisurely lunch, we roamed back to the boat dock for the ride back to Venice. A perfect saturday afternoon.