However, a local running group, Venice Running Days, in association with the Venice Marathon, organized a 15 k night run through the city. Brilliant idea, to do a run at night when all the streets are empty. The link below is a video of the course mapped out, beginning at the port on the Zattere and winding it's way throughout the city.  Do take a look.

Along the course, somewhere between 10-11 k, the runners would be going right by our house! I noted the event on my calendar and was prepared to watch from my vantage point on the terrace.

Yesterday was not the best weather day here in Venice. We had a nasty thunderstorm in the morning, then it cleared up mid-day, with another storm hitting late afternoon. Fortunately for all the race participants, the skies cleared up by night time and the temperature was also perfect for running in shorts and t-shirts.

I knew the race was slated to begin at 9pm, so I figured the fastest runners might be already at the 10k mark around 9:30. About 9:15 I stepped outside, looked down and noticed a white haired  gentleman on the street below me, dressed in a neon green high visibility vest. He had a flashing light strapped to his arm, and he was waving a lit-up orange wand, similar to something an airport traffic person on the tarmac at an airport would use. No, an aircraft was not coming in for a landing on our sidewalk.  He  was busy practicing his hand motions to direct traffic.  The original race course was set to run past us, straight down the edge of the street to the waterfront, then along the waterfront all the way to the bridge over towards Giardini.  However, with all the rain the path along the waterfront was more like a stream. Obviously someone at race headquarters had decided to change up the route to keep feet dry.

The volunteer down on the street practiced his arm motions for 15 minutes or so. Every once in a while he'd say something out loud, as if he were having a conversation with someone.  But there was no one else but him down there. Then I noticed who he was conversing with.  A cat.  The cat, lying   on the sidewalk or walking around a bit,  was keeping the man company as he swung his arm with the wand back and forth.

The first runner was past our house just a few minutes before 9:30.  Our traffic controller yelled out a cherry "Ciao!" and then proceeded to give directions , " Sinistra, poi destra, poi lungo viale"
The second runner followed seconds behind, and got the same greeting and instructions.

In another five minutes  runners started arriving down the street in packs.  Our guy downstairs was swinging his orange wand, and greeted each and every group with the same happy "Ciao!". For some he yelled out "Bravi, Dai!"  (Good, go on!) Every once in a while he'd not only give the directions in Italian, but also in English. "Left-a, right-a, then-a straight-a down-a  da street-a".  This went on for well over an hour, as a couple thousand runners made their way through our little corner of Venice. 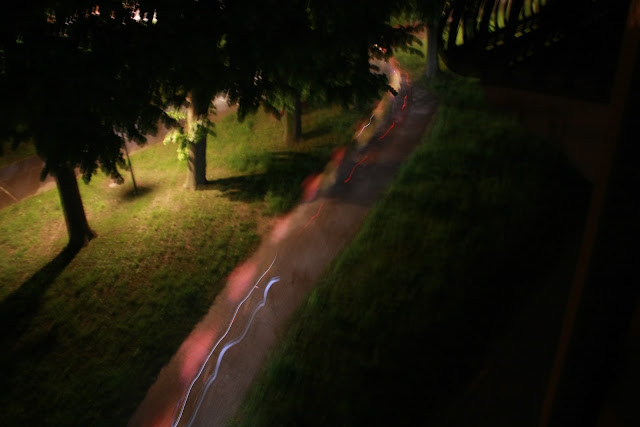 All the runners were wearing head lamps, some had red blinking lights on their backs, some even had shoes with blue lights in the heels.

While the friendly volunteer downstairs was directing runners, the cat was getting into the action. Every once in a while we'd hear the man yell "No, Milo, vieni qua"  (Come here) or he'd run a few feet from his post and scoot the cat out of the way. He and Milo greeted every runner that past our corner of Sant'Elena. Runners were  yelling back to him "Buona sera" or "Grazie".

I can only imagine how joyful this event was for the participants.To be able to run through this spectacular city on a clear spring night must have been something so unique and memorable. If only I could run, I am pretty sure I'd have been out there with them. Even from my non-runner perspective,  I know how happy I was looking down at them.  And this guy on our corner made it even more special. 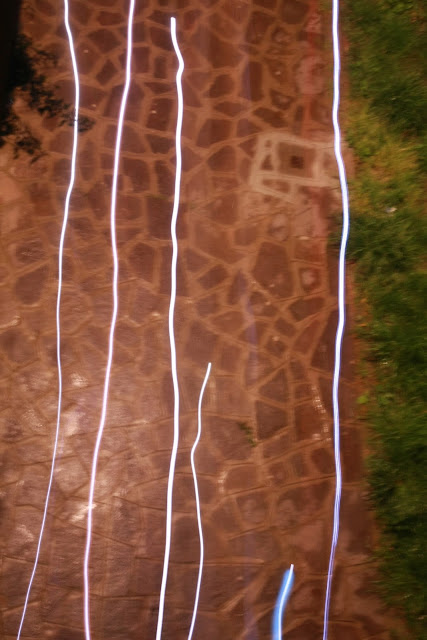 Photo of runners on the sidewalk straight below our terrace. ( My husband has a fascination with these night time light streams)  Thanks to Mike Henderson for the photos.