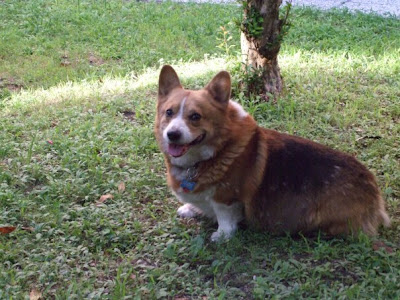 Last nite, around 9:30, we decided to walk the dogs to our usual spot, Campo Santa Margharita. Most Venetian dogs walk unleashed. We sort of admire that actually, but our two dogs haven't become completely Venetian yet. We do let go of the leash from time to time to see how they'll do. They actually do pretty well. But, by and large, they get hitched up before we open the apartment door. And off we go....

To be honest, Leopold, our Corgi, has done pretty well off-leash, at least there are no streets filled with cars they can run into and get hit. He tends to want to stay right at your heels anyway, not that he is concerned at all about HIM minding you, basically what is going on is that Leo is herding US. That's just what Corgi's do.

Last nite as we walked, Mike and I were noting that it had been awhile since Leo was out loose, and next thing I know Mike bends down to unleash the dog. Leo's doing nicely, I don't pay any more attention. My dog Sam and I begin to get ahead of the others, we are already over the bridge and in front of the church at Carmini. It's 9:30 ish, I see the church doors are open and lights are on, I hear voices coming from it. That's a bit unusual. So Sam and I stop at the doorway for a peek in. There are only a handful of people inside, way up front in the first row of pews, and there is a priest doing what looks like performing a mass of some sort. I'm just looking, when all of a sudden I notice Leopold has entered the church, and is headed down the aisle!!!!!! OH, bedlam is about to ensue!!!

I can't run (arthritis in my knees), and I have Sam on his leash, so I am just about screaming to Mike to run come get Leo out of church. Mike says "What???".

In the mean time Leo has stopped going up the aisle, thank goodness, but is having a good look-see for himself. By this time Mike has arrived at the doorway and is whispering, "Leo, get back over here". Fortunately, Leo is basically a good boy. He just looked back at us, turned his big fat Corgi self around, and trotted himself out the church door.

Thank you, Lord. One big mishap avoided. I can only imagine what that priest would have said if Leo had arrived up at the altar with him.

Health care is a global topic this year, and is most certainly on the minds of every American I know. Everytime we meet an American vacationing here in Italy, one of the first questions we are asked is what is the Italian health system like. Since we've just had our first surgical experience in a hospital here, I thought this would be a perfect topic for blogging.

A bit of background info is needed first : My husband Mike was having some abdominal pain, which, after doing some research on WebMd, he self diagnosed as a hernia. He made an appointment with his doctor here in Venice, who confirmed it. The doctor told him the hernia was small, and probably would not be operated on until it got bigger, but, he gave him a referral to a surgeon. The surgeon examined Mike, and decided to operate sooner, rather than later. Since it wasn't life threatening, his surgery was scheduled in July, about 90 days following his first visit to the surgeon. He had several phone calls with the scheduling office at the hospital, everything seemed very efficient.

On the morning of the operation, we left home around 6:15, taking the vaporetto from Piazzale Roma to Ospedale. Mike was to report to Day Surgery at 7:30 am. He had been advised to bring pajamas and clogs with him, and not to eat any breakfast. We arrived a bit early, so we joined a few others already in the waiting room. At 7:30, we queued up outside the nurses office to be checked in. They actually came down the line and called for Mike to come forward. We then discovered he was scheduled to be operated on first that day. Good thing to know.

Following some paper signing, we were shown to a hospital room down the hall which had 3 beds in it. It was large and very clean, and also had a bathroom with a shower. Mike was taken to the bathroom where the nurse shaved an area on his abdomen. Mike was told to take his clothes off, wrap a green sheet around him, and get on the gurney. The nurse covered him with a blanket, and they wheeled him off to the Operating Room.

Here is where I noted a difference between hospitals in the US and in Italy. They did not have hospital gowns, not even disposable ones. You wrap up in a sheet instead. Ok.. I can see that this would save a bit. Hmmm.... Mr. Obama, maybe this would cut a line item out of the health care reform bill.

While the surgery was taking place, I went down into Campo Giovanni e Paolo to Rosa Salva for tea and a brioche. About an hour later I returned to Mike's hospital room to await his return.

Mike was wheeled into his room about an hour later than had been estimated. It turns out he had been given a local anesthesia, but needed something stronger. They knocked him out. His version of this is alot funnier than mine, he retells thinking the room was upside down even. You have to have a little patience with him, he had never been a patient in a hospital before, and this was his first surgery. And, for some unknown reason, he seemed to think it was going to be a party. I had cautioned him that no matter how small the incision might be, it was still abdominal surgery. I thought it was going to sting. I won.

He remained in the hospital room until almost 5pm that day, during which time the nurses came several times to check on him, make sure he could get up and walk about, and get to the bathroom ok. A doctor came in to examine him also, and gave him the final ok to go home. They gave him some pain medication to take with him, and made an appointment for the next Monday morning for a follow-up appointment.

We were incredibly impressed with the care and attention Mike received. Everyone, and I mean everyone, made extra effort to ensure that we understood exactly what we needed to understand. If there was someone who didn't speak English very well, they went and got someone else who did speak better to help them. They didn't have to do any of that, we were the ones who should have been speaking better Italian. In short, we were highly impressed every step of the way.

As for differences... besides the hospital gown, there is one other thing. This cost roughly 75 Euros for the whole thing, including the office visit to the surgeon, the surgery, and the follow up visit. Wow.
Posted by karen at 5:21 PM 1 comment:

Today, August 15, is Ferragosto. It's a national holiday in Italy. Basically what that means is just about everything will be closed, and Italians will be heading to either the beach or the mountains for a long weekend. Ferrogosto is a celebration of the harvest, and also a celebration of the Assumption of Mary into heaven, and dates back to Emperor Augustus. I haven't quite figured out how they mixed a religious holiday with a pagan festival, but, they did.

What we've noticed is that around the first week in August, we start to see signs on shops, caffes and restaurants indicating they are closed for FERIE- holiday. Return dates are somewhere around the last week in August. Looks to me like everyone plans their annual summer vacation to include Ferragosto.

Shops that weren't closed already for the holiday are certainly closed for Ferrogosto. Today Venice seemed empty, at least it was in my neighborhood. We live close to the train station and Piazzale Roma, so we normally see a fair amount of foot traffic coming and going from these areas past our street. Today was particularly quiet. Even the grocery stores were only open half a day. Everyone else must have headed for the Lido.

Happy Ferragosto!
Posted by karen at 5:09 PM No comments: