What do you do after the plague decimates your city?  You throw a huge party!  And Venice, the hostess with the most-est,  has been hosting the best post-Plague party ever every year since 1592.

Festa del Redentore 2015 kicks off Saturday night.  This is a big, big deal here in Venice. The plague years hit Venice hard back in 1575 (and again in 1630), and Venetians will never forget it. In fact, every year since the Redentore church first opened it's doors  Venetians have held a special celebration to give thanks for the end of this devastating plague.

Back then, the Doge and Senators would be the first to walk across a temporary bridge constructed of barges, crossing from the Zattere in Dorsoduro to the Giudecca side of the Giudecca canal to attend a special mass. 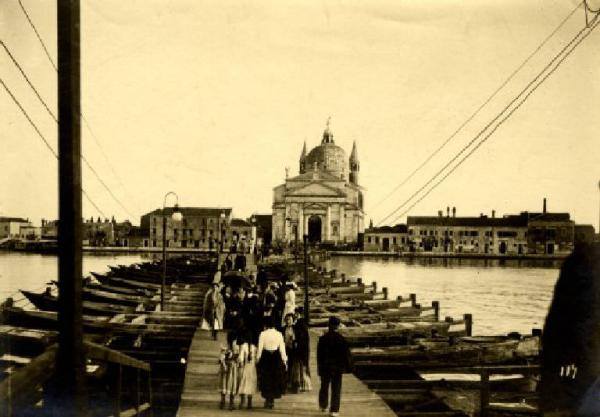 Today, the same procession takes place, only the bridge of barges has been replaced by a pontoon bridge constructed across the Giudecca canal. 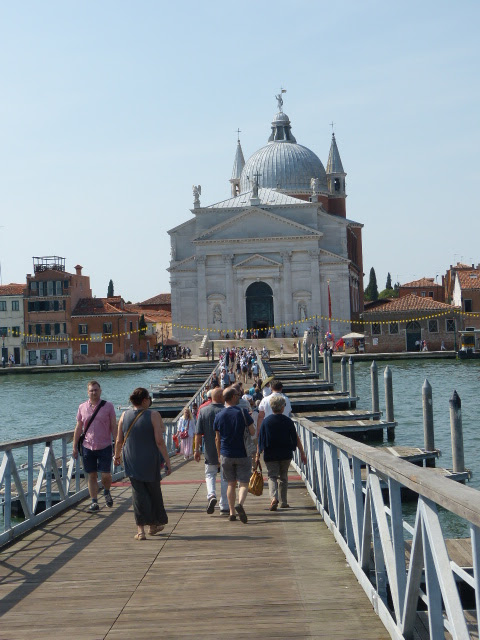 In order to join in the celebration and enjoy it like a local, here's some hopefully helpful information and a few tips.

1. The pontoon bridge opens at 7 pm on Saturday night (July 18) after a special brief ceremony is conducted by the Mayor of Venice, the Patriarch of Venice and several other invited dignitaries.  As soon as this ceremony concludes, masses of people will make the pilgrimage across this special bridge to begin attending mass at the Church of the Redentore, and also to take up the their positions along the canal to watch the fireworks later.

Tip:  If you want to see the ceremony and be one of the first across the bridge, plan to arrive at the Zattere side of the bridge early, around 6:30. Note- and this is important- the bridge is CLOSED to all traffic at around 11pm, and remains closed until the fireworks end. So- if you plan to over to the Giudecca side, get there earlier. That also means if you are on the Giudecca side, you are staying there until all of the fireworks are over and the bridge is opened up again. It helps to know what you are getting into before you start.

2. Beginning around 7pm, local families will begin eating dinner along both sides of the Giudecca canal, and also on the St. Mark's side from in front of the Doge's Palace along the Riva degli Schiavoni  on down to the Giardini. They typically stake out their favorite spot the day before, and either leave chairs and tables there or mark off their space with masking tape.  Reserving space works on the honor system, but you better believe everyone respects each other!

Tip: Do like the locals do, and have your dinner canal side. Just be sure to NOT take up a spot already reserved.  Pack a picnic for yourself. Shop at one of the local grocery stores (Conad on the Zattere or Punto in Campo Santa Margherita are great choices).  Hit their deli section and buy some already made Venetian specialties.  Best choices to eat like a local-  Baccala and Sarde in Saor (fried sardines in marinated onions).  Some cold pasta salad would be a good choice and for desert, you must, absolutely MUST have watermelon.  It's tradition.  Tuck a bottle or two of wine or prosecco into your bag and you are all set.

3. Fireworks- some of the BEST fireworks known to man - begin just before midnight. No matter where you are sitting (or standing), it's going to be a great show. After the fireworks, the mass exit begins. Be prepared for this and you will enjoy your Redentore experience much better. There will be upwards to 200,000 people at the fireworks, and the majority of them will be headed to the train station or Piazzale Roma at about the same time, clogging all the streets.  It could take you an hour and a half to get back to your hotel, so just plan on it.

Tip: Wait until some of the crowd leaves before you attempt getting back to your hotel. If you want to make your exit easy, DON'T choose to sit on the Giudecca side of the canal. There is a major bottleneck getting back over that pontoon bridge after the fireworks are over.

4. Mass is held in the Redentore church every hour beginning right after the bridge opens, and ending just before the fireworks begin.  Sunday morning several masses are also held.

Tip:  Do like the Venetians and attend mass, or at least go in and light a candle.

Sunday there are several boat races held in the Giudecca canal, culminating with the race for gondoliers at 5:30 pm.

Our new mayor has announced bars and shops may remain open until 2pm on Saturday night, and,  after several years of downplaying the Redentore celebration due to dwindling funds in the city's coffers, he plans to return this year's celebrations to what it had been in years past.  This most likely will mean even more people will be coming in to the city for the events, and more party boats in the lagoon. This could also mean bigger fireworks. One can only hope.

I'm ready for Redentore 2015. We, too, will  be dining canal side right here in Castello with friends who were born, grew up, and still live  in this neighborhood. My contribution to the picnic is a torte di ricotta (very much like a cheesecake), which currently is cooling on the top of the stove.

It's the dog days of summer here in Venice. I'm talking HOT. VERY HOT. And humid. As much as I love beach time, it's been almost too hot for that too. I've been spending time indoors, trying to keep as cool as possible, doing lots of reading instead.

Last night the electricity in our building went out twice. My friend Jill around the corner from us told me it went out 3 times in her building.  I'm convinced this little "brown-out" was a sly message from our electric company: they wanted us all to do without the AC for a while.  I have news for them. It's hot, I'm keeping on the AC.  Supposedly this heat wave will last another week or so. I'm planning on a few more brown-outs along the way.

I've decided I'm going to try something new on here on the blog. I'm going to start a new feature I'm calling "Secondo me"  (English translation - in my opinion), where I'm going to share some of my favorite little tips and secrets. So here goes...

If you ask most Venetians for a favorite restaurant recommendation, you can be sure the name they give you is maybe their second or third favorite. They are very reluctant to give away their favorite, because they don't want it to be overrun with tourists. This quasi-Venetian has taken on that same trait in recent years. But... I'm tossing caution to the wind here because recently a few new restaurants and bars around town have blown my socks off. These guys deserve to succeed and I am happy, happy, happy to pass along my highest accolades.

Today I'm singing the praises of Trattoria da Jonny, a new little place in Campo della Gate in Castello. (Michelle, if you are reading this, that's right! Just across Ponte dei Scudi!).  A few months ago we noticed renovation work going on in earnest inside a tiny little place on the corner of this campo that had been closed tighter than a drum for years. We were curious, and very hopeful this wouldn't turn into a tourist trinket shop, which is about the only things we see springing up left and right. The gods were with us on this one.  Mid-May a new restaurant opened it doors in the campo, including lovely tables and chairs outside. 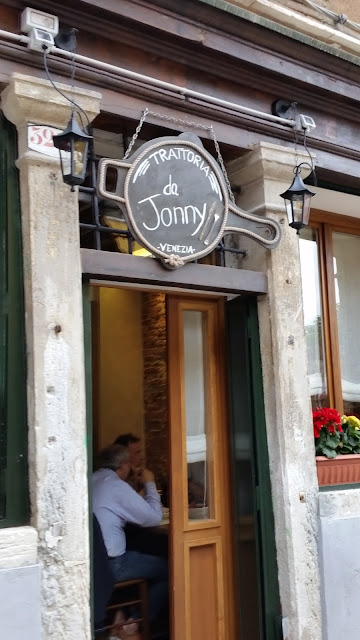 The first week they were open we stopped by for dinner. Mike chose the roast duck, I tried the spaghetti con seppie nero. Both scrumptiously prepared, and beautifully presented. This place got high marks for everything, from ambiance to service to table wine, it has it all. We met the owner, Jonny;  Hugo, the chef; and the waiter Joe.  Ever since that day whenever I pass by the place, Joe gives me one of his huge smiles and a happy "Ciao!" 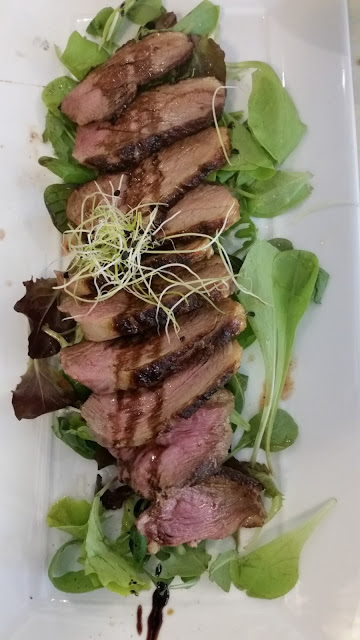 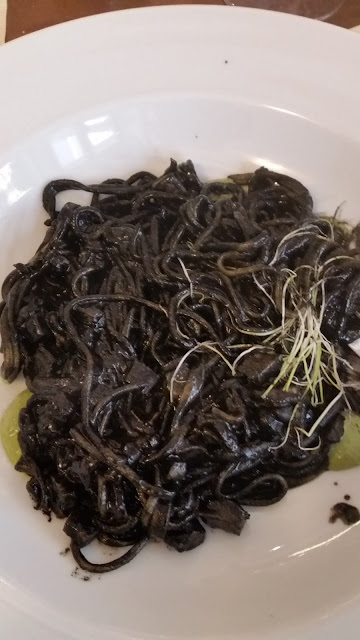 Monday, after a long hot morning in and around Venice, I decided a good lunch was in order. I phoned Mike and invited him to meet me at da Jonny's.  This time we started with an octopus salad to share. I can't believe I forgot to snap a photo!  It is the best octopus we'd ever had!

Next up, a rombo for Mike and frito misto for me. 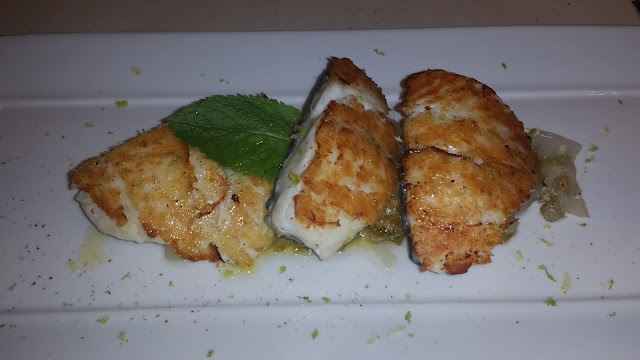 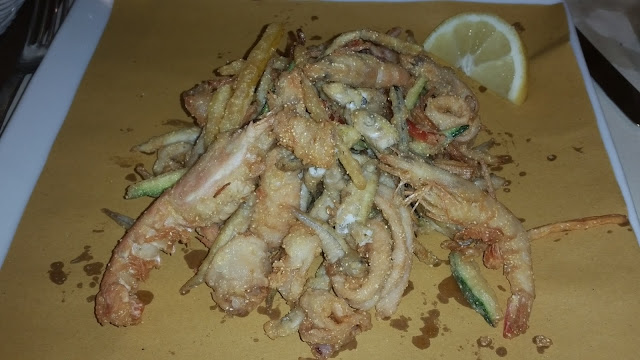 I had to end the meal with the tortina di ciccolata.  Molten on the inside, to die for. I'm already planning my next meal here- just the octopus salad and the tortina.  Buonissimo! 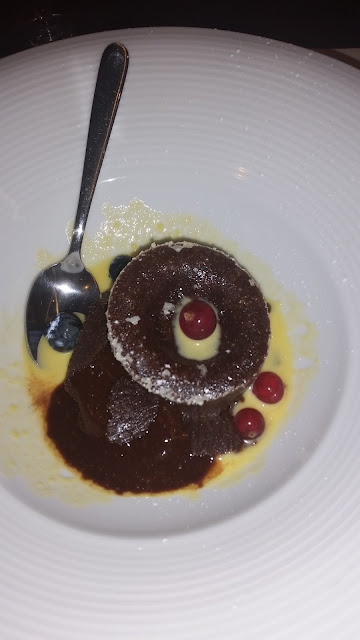 So, friends, when in Venice, secondo me  RUN, don't walk, to Trattoria da Jonny. Tell them I sent you.