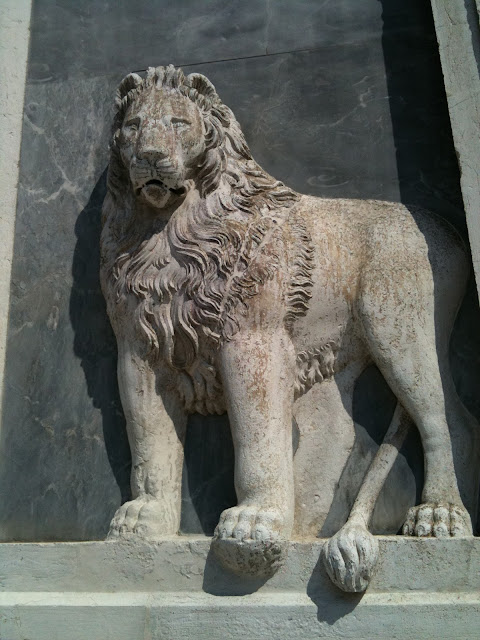 One of my favorite lions in Venice, on  the Scuola Grande di San Marco, has nothing to do with the contents of my blog today, but since he graces the front of our wonderful hospital, I thought I ought to use it. I am writing about something medically related, after all.

In a recent blog, I wrote about having to make several trips to the hospital on the Lido, and that my orthopedic surgeon there was retiring at the end of June.  Since then, I've had to have a series of injections in my other knee. As there is no one replacing my dear Dott. F at Lido, I had to see a different doctor at the Giustinian building in Dorsoduro.  If you are a long-time follower of my blog, you may recall one of my wonderful adventures being lost in the basement of the Giustinian building. I have avoided this particular building ever since!  Unfortunately, I had no choice this time, so back to Giustinian I went.

The first injection went off without a hitch. I felt a little better about having to go to Giustinian.  The second visit was a complete bust. I went at my appointed time, sat in the waiting room, and waited, and waited, and waited. Finally I tracked down a nurse. She looked at my appointment papers, motioned for me to sit, and ran off. When she returned, she asked me to follow her. Down a maze of halls we went, I had no idea what was going on. We finally got to an office where another woman was behind the desk. She looked up at me and said " We called you but you never answered. The doctor (Dott. D.) isn't here today."  We went back and forth, it turns out she called but never left a message. She wanted to know why I didn't pick up the phone. I was busy at the time, I told her. I wanted to know why she didn't leave a message.  Her response?  "No one here in Venice ever listens to voice mail, so we don't bother doing it."  Seriously.  Bottom line, we had to reschedule the visit.

The second injection- when it actually happened- also went smoothly. While I was there, I asked the doctor to take a look at my hand, which had a lump at one of the joints on my fingers.  I asked him if there was something I could do for the arthritis in my hand, which seemed to be getting worse lately.  Dott. D. took one look and said, "Signora, this isn't arthritis. You have a tumor. " Next he asked, "You are American, yes? "  Yes.  He instructed  me to stay on the examining  table. He went  to his desk, did something on the computer and  told me to come have a look.  I thought he was going to show me information about this tumor, maybe some photos so I could have a better understanding of what it was.  Instead, he had a document displayed on his screen, written in English and asked me to translate it for him.

I wanted to laugh out loud.  He's asked me to translate a Letter of Recognition, sent to him by the US Army in recognition of his service in Afghanistan assisting an American medical team. It was filled with medical terms. I study Italian,  I'm  at  upper Intermediate level but  I'm certainly no translator. Oh, what the heck, I  took a crack at it.  As I translated line by line from English to Italian, he typed my words on the computer. Every once in awhile he'd look up and say "Hmmm.. I don't like this word here. Do you have another instead of that ?"  I got out my phone which has a dictionary on it and looked up the word.  I'd give him a choice of one or two synonyms and he'd choose the one he liked, and off we'd go again until we got to the end of the letter.  Dott D.  was happy with the result, and I'd had one more weird medical experience to write about.

But we're not done yet. I asked him about Afghanistan. He said it was the worst 3 months he'd ever spent in his life. He was doing surgery on casualties there along with an American team of doctors.  Next, he got on the phone and scheduled an appointment for me to have this tumor removed. He said he had connections at Mestre and could get me in right away, but he couldn't do that at the hospital in Venice, so I should go to Mestre.  I said, "I hate going to Mestre. " He said, "Go to Mestre, we'll do it there." I think my translating got me a little connection.  He wrote out the appointment and off I went. Thanks, Dott. D.

Today was my apppointment at Mestre.  Honestly, I hate to go to Mestre. I had to take a boat to Piazzale Roma, then the 24 H bus to the new hospital out there. I was thankful to actually have arrived at the right place. Anything else that might happen would be gravy. The only other time I'd been to that hospital was in an ambulance through the emergency entrance, so I was totally unfamiliar with what the rest of the place looks like. This hospital is enormous!  After much hunting and pecking my way through the place, I located a secretary who took a look at the letter Dott. D. had given me and pointed me to an office.

Trying my hardest to remain optimistic, I just had a sinking feeling that the day was going to turn south. I waited my turn in the waiting room.   When my name was called, I was surprised to discover that my doctor was NOT the doctor in the room with me.  I fully expected Dott.D. had scheduled the appointment on a day he was working at that hospital. Surprise, surprise.  This new doctor took a look at my letter, looked up at me and said, "Dott D.  Of course."  That should have tipped me off right there.  He asked for the x-rays.  I told him Dott D. hadn't send me for any x-rays.  He reached for my hand, took a closer look, then looked up and said, "No, I'm not cutting without x-rays".  Then he asks, "Why are you here? Why didn't you just go to the hospital in Venice? "  Hmmm. "Well, Dott. D sent me here."
He responds, " Mestrini come here. Venetians stay in Venice.  Doesn't make sense for you to come here.  You can come back here if you want, but I think you should just go to Venice for the x-rays and see the surgeon there."

Coming out of the hospital I discovered there is a train that goes  right to the Venice Santa Lucia station. You could call that the fun part of my day. I bought a ticket for 1.25 Euro ( had to use my credit card since the ticket machine wouldn't take cash), hopped on the train, and got back to Santa Lucia in under 20 minutes. Sweet.  Since I'm not going back to the Mestre hospital I won't be using this handy route, but it seemed like something I ought to know about.

The train ride gave me a little time to ponder my situation. Makes a lot of sense to have x-rays. But my Dottore D. didn't need them. No, he'd been to Afghanistan. He can probably do heart surgery without x-rays.

Tomorrow I am making the x-ray appointment. In Venice. Even if I get sent back to Dott. D for the actual surgery, I'll feel a little more at ease I have them.  You never know,  someone might even look at them.

And why is it some of my best adventures involve the Italian medical system?  I'd like an answer to that.

Blogging from the beach (Warning, this may contain sand) 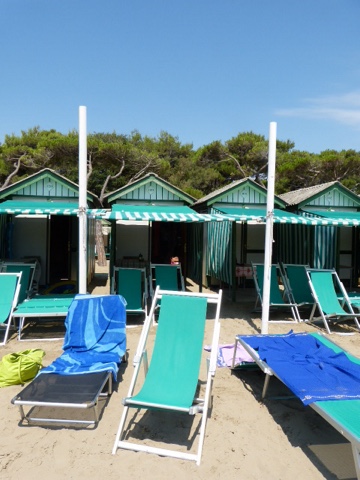 Trying something new today. I've been spending a lot of time "fuori" (outside /away) from the house lately, and thought I'd attempt a bit of blogging on the run using my iPad.
If this works well enough for me, it may well be the answer to one of the issues I've struggled with all summer. How to find enough time to keep up with writing. Heck, I haven't been able to find enough time to get to the beach even. Wouldn't it be heaven if I can connect the two? I'd even suffer with some sand on the iPad screen now and then!
The Blogger app on the iPad is pretty bare bones. i can post photos, and have only bold or italics for text enhancement. No other fonts or font sizes to choose from... but... Bare bones from the beach or on the go could be just what this girl needs.
Stay tuned for more from capanna 169 - my beach home on the Lido.  Right now I have one other little technological problem to resolve. Must email myself some photos that are on my smartphone so I have access to them here on the iPad.
Ciao tutti!
Posted by karen at 3:30 AM 7 comments: