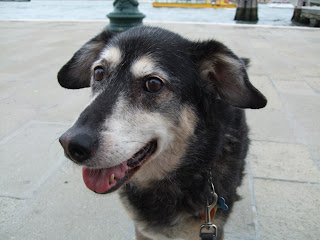 It is with great sadness that I write today about the passing of my sweet faithful companion Sam. There are no words to describe the incredible joy he has brought to my life, nor the grief I feel today.   Sam was 17 this year, he had a wonderful long life.
Posted by karen at 2:57 PM 28 comments:

Che Freddo!!!!  We have been having incredible COLD days here over the past week. So cold that the lagoon has frozen over, and the Grand Canal and even the smaller canals have ice on them. 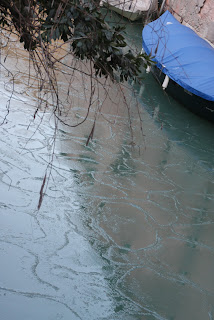 Ice chunks on the canal outside my apartment 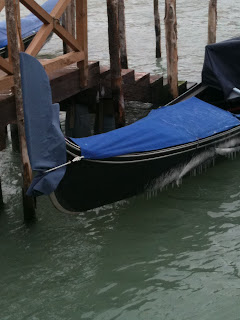 Ice on the bottom and sides of the gondola.
The Carnevale Regata on Sunday was cancelled due to the frigid temperatures, and the temperatures have only gone lower throughout the rest of the week. Last night a wind (a Bora) was whipping down the streets and the canals  with such force we thought our shutters were going to be ripped off the house. All night long we heard boats banging up against the brick wall. This morning I read in the newspaper that il Toro, that bull I blogged about the other day, suffered quite a bit of damage from the high winds. It was constructed mostly of reeds from the lagoon. I think those reeds made their way back to the lagoon last night.  By mid day, what was left of il Toro had been moved from it's mooring next to La Salute to a place on land.

Besides the weather, this just hasn't been a good week at Ca' Hendersoni.  Even though I admit we are living a dream life,  there are still times we get a brutal reminder that life can smack us in the face just like anyone else.  On Monday, I took my dog Sam to the vets.  He is 17 yrs old this month, quite the old guy, with rapidly declining health. He's been on medication for arthritis, however in the last 2 weeks he can barely move. I wanted to know if there was any stronger medication we could be giving him.  Well, we now know that there is something a bit more serious causing the pain- he has a large tumor on his right back leg.  The vet took some blood and extracted some cells and sent them off to the lab. Unfortunately, the test results showed nothing conclusive. The next step would be a biopsy.  The vet, and we agree, feel that Sam is too frail to deal with surgery. At this point, we are giving him a new pain medication, much stronger.   Not a good start to the week.

Tuesday, I dropped a knife between the washing machine and the sink cabinet.  In order to retrieve it, we had to move the washer. When we put the washer back in place, it wasn't exactly right, so I ended up jacking it around a bit to get it positioned properly. While I was jacking around with the washer, I managed to bump the stainless steel counter top that has the sink embedded in it.  This counter top is not anchored in anyway- I moved it about a quarter of an inch off center.  So- I had to jack around with the counter top.  While I was doing that, I sliced open my thumb, which bled like an S.O. B. I had blood to clean up everywhere! Finally, with everything back in place, I got out of the kitchen before I could cause any more damage!

Two days later, while we were cleaning up dinner dishes, we looked down to discover we were standing in about a quarter inch of water, that was quickly making its way across the entire kitchen floor!!!  Somehow, while I was "fixing" the counter top I had moved previously, the pipe under the counter came loose, and gradually got looser over the two days.  When it finally gave way, the water spewed everywhere!  We had a swimming pool in seconds.  We had to empty the entire cabinet below the sink and dry that up. We had to mop up the floor. And- we had to pull out the washing machine to mop up behind it. I should have just left the washing machine where it was in the first place!

See, my dream life has it's crap days too!!

I'm sorry to say that my Venice Carnevale updates are going to take a hiatus starting tomorrow because we will not be in Venice. We're headed to Portugal, and will catch Carnevale on Maderia Island, where they celebrate it more like in Rio de Janiero.  We'll be back in Venice just in time for the very last night of Carnevale.  I am very eagerly awaiting the closing event of Carnevale 2012- Vogata del Silenzio. I watched it last year from the Accademia bridge, this year we have tickets to be riding in one of the gondolas that night. Vogata del Silenzio, a silent procession of gondolas down the Grand Canal ending at St. Mark's square, begins at 11:30 pm.  By midnight, all the boats will have arrived at St. Mark's square, where the wooden bull,  il Toro, will be set on fire, signifying the end of Carnevale and the beginning of Lent.

According to weather reports, the temperatures in Portugal are about 20 degrees warmer than in Venice today. Let's hope so. The forecasts for Venice are calling for snow on Friday and Saturday.

Mike and I walked all the way up the Zattere to the Dogana this morning around 11:30 to get photos of the bull on it's first day. Today was the coldest day we've had all winter ! The lagoon was frozen this morning, it was -1 F when we were out. Trust me, I wanted to stay inside, but my desire to see Il Toro on it's arrival had a higher priority than my staying warm.

All of the news articles advertised the inauguration would be at noon, and indeed it was. Not a very big turn out however, only about 30 people, mostly press, and a few other locals like us. We know the sculptor and mask maker Guerrino Lovato, the artist who made the bull, from our neighborhood, and we were very happy to be able to congratulate him on this incredible sculpture in person. 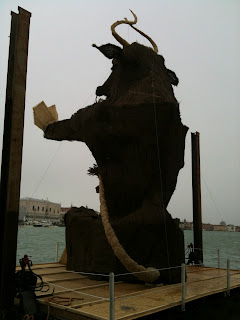 Mike estimates the bull is about 50 feet tall, way bigger than I imagined it to be. Above is the view you have when you are standing on the Dogana. 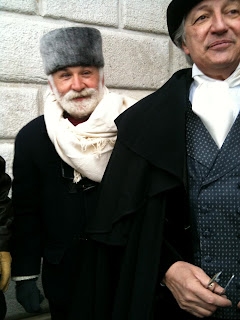 Here is Guerrino Lovato as he is talking to the press this morning. When I had a minute to congratulate him he turned to me and told me he was dressed in style with his scarf and hat for the occassion! 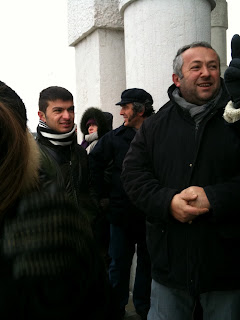 These guys assisted with the construction. 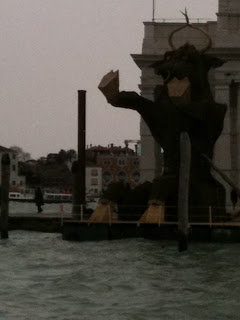 After seeing the bull at the Dogana and talking with Guerrino a bit, we got on the vaporetto in front of Salute so that we could ride past the bull in the hopes of getting a few decent shots of a front view. It was very grey today, so my photos are not so great. But- here's a front view. Cute, isn't it? 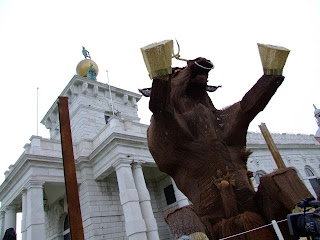 This photo is courtesy of the Carnevale 2012 website.  The bull is anatomically correct, including a huge pair of balls! 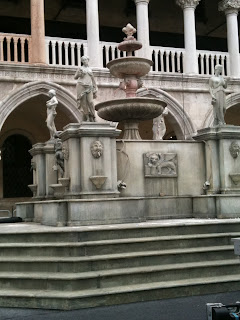 We disembarked the vaporetto at San Marco Vallresso in order to check out the Fountain of Wine that will be used this evening for the grand Brindisi (toast) to celebrate the offical opening of Carnevale. When it is working, wine will be spouting from all the top and all the lion's mouths.  I had originally planned to walk to St. Marks at 6pm to witness this event also, but it is way too cold. One walk was enough today. toasting Carnevale from the warmth of our apartment.
Posted by karen at 2:19 PM 3 comments:

Carnevale 2012 kicks off tomorrow in St. Mark's square at 6pm with a special toast, with wine flowing from a large fountain that is constructed specially for Carnevale.  There are a few other events over the weekend, then things are quiet until Feb 11 when things really get going.  Here are some photos of prior years costumes to give you a taste of what's to come - soon!  While St. Mark's square is a sea of humans during Carnevale, it's worth being jostled for a few hours just to be able to enjoy the sights. 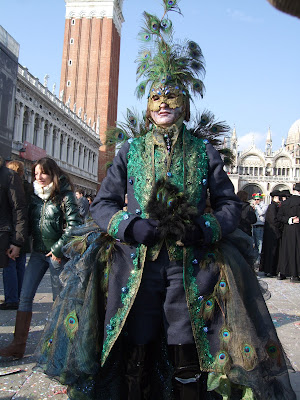 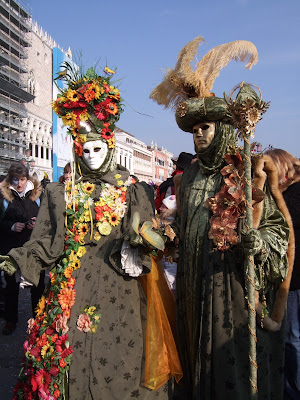 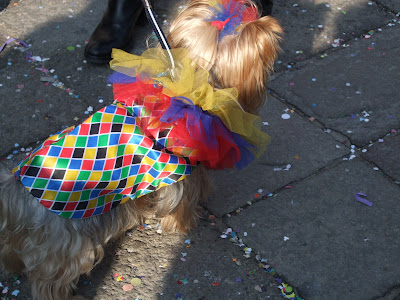 Yes, even the dogs join in. 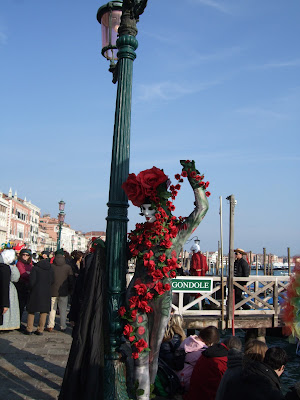 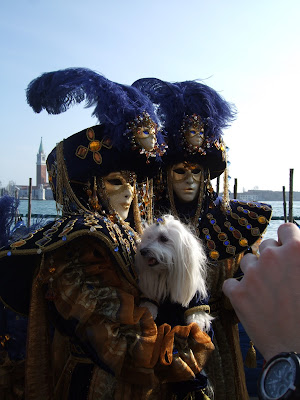 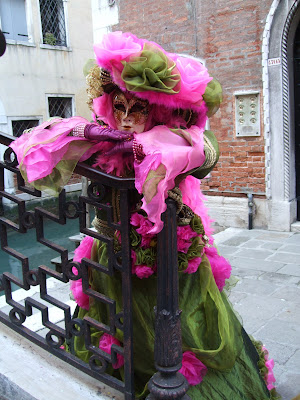 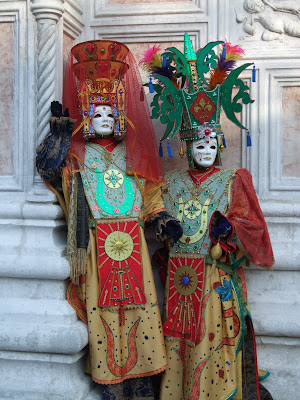 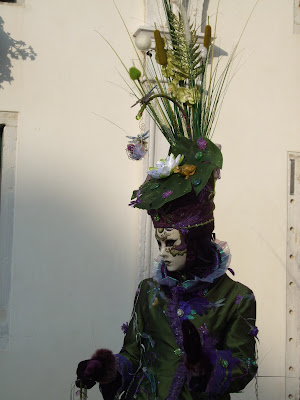 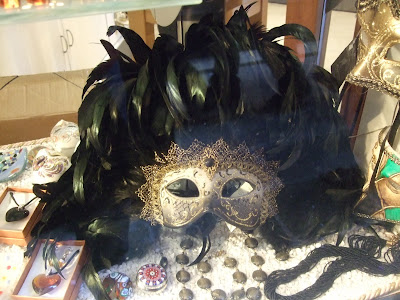 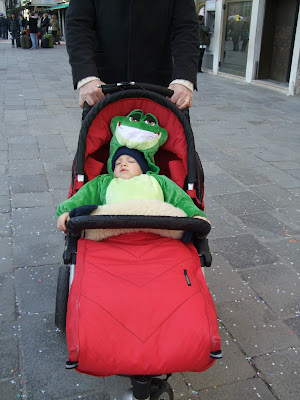 This little guy looks like he's had all the fun he could take. 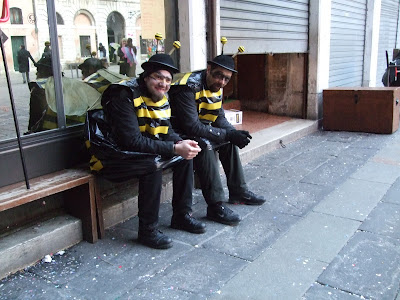 And these two are in about the same shape! 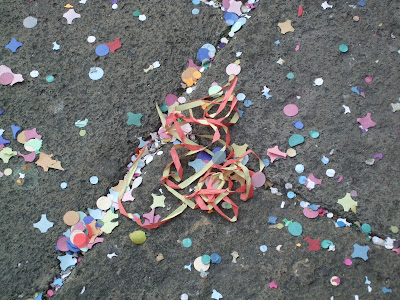 At the end of the day, the streets of Venice are covered with confetti. Oftentimes, you can still see confetti on the streets well into March.

And one more "taste of Carnevale"- a few more frittelle. These are from Colussi's bakery near Campo Santa Barnaba. If you have not yet found your way to Colussi's, put it on your wish list.