Not quite all quiet on the southern front

Did you notice my title is a little take off on the famous "All Quiet on the Western Front" ?  I really wanted to use Western in my title too, however, I'm writing about events on the south lagoon here, so I had to do a slight modification.

The other day a friend of mine emailed me with a request to see more posts about my rowing adventures. It was perfect timing, cause we'd had a doozie of an experience just a day before!

Ever since the interim mayor passed a new law banning dragon boats from the Grand Canal, we've had to do all of our rowing in the south lagoon.  Before his brilliant move, we did a fair amount of our practices in the central part of Venice on the canals of the  Dorsoduro and San Polo districts, as well as the Grand Canal.  To get to the south lagoon, we have to cross the Giudecca Canal.  It's not fun.  This canal is used by all the big cruise ships, the car ferries going back and forth between Lido and Tronchetto, and all the bigger boats hauling tourists between Tronchetto and San Marco. The canal is full of boats going willy nilly, so lots of waves. Big ones. We're out there bobbing around like a cork! Trying to cut across this canal is not easy, it's always the worst part of our practices.

Once we get over to Giudecca, things get much easier. We do a quick row down a canal to cut through to the south lagoon. Once in the lagoon, we usually row out to either San Servolo or San Clemente islands, and then do lots of sprints between the bricole.  Bricole are the poles marking the channel (see photo below for an example).  Boats have to stay inside the channel markers where the water is deep enough. Outside of the channel markers the lagoon can be quite shallow. 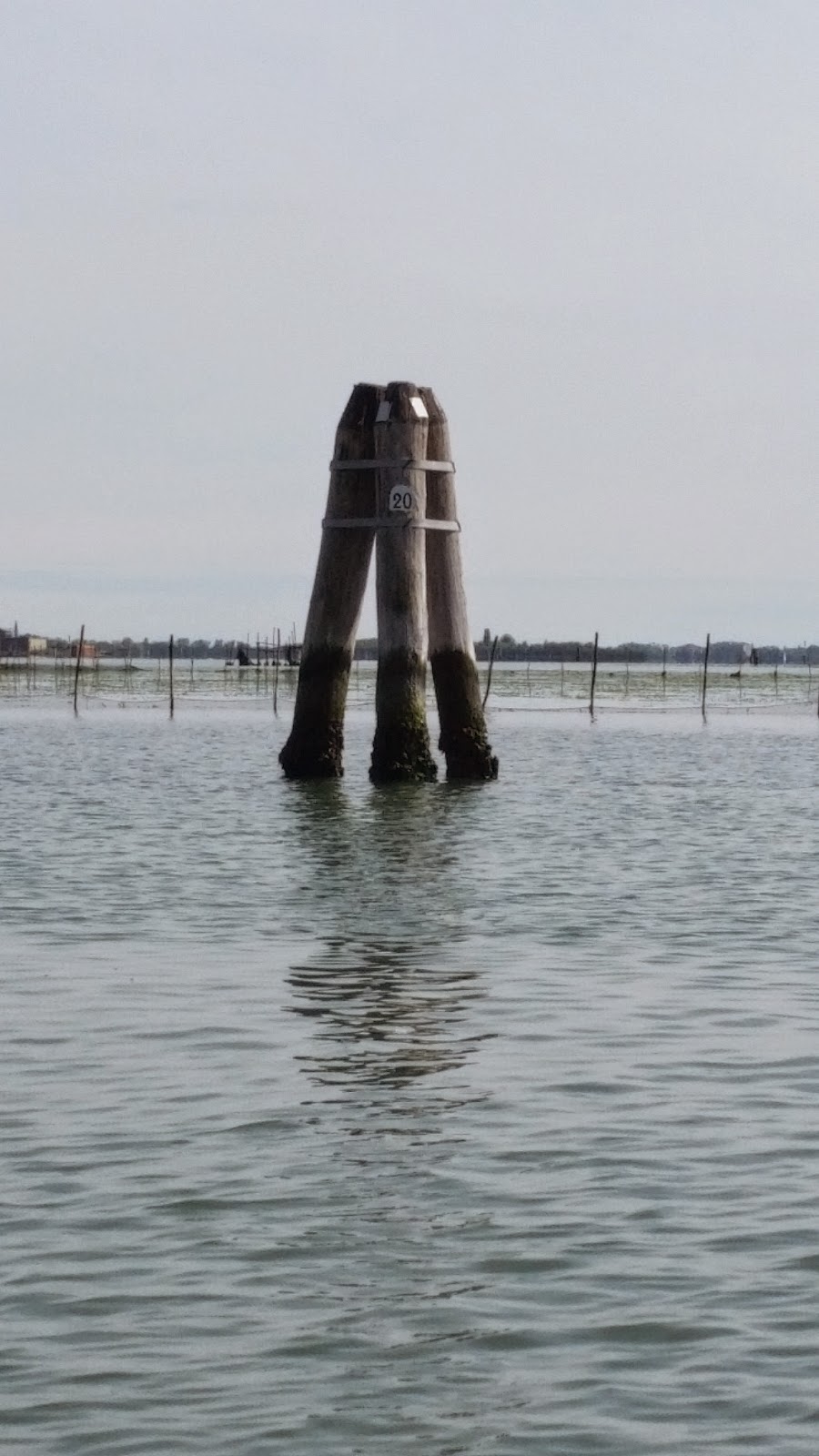 Usually, rowing in the lagoon is a very peaceful, calming experience (unless it's sprint time, that is).  I have come to love being out on the lagoon. I've also come to love the rowing, itself. When I first started, I was terrible at it.  Now, the movement is second nature. I get in the boat and my arms seem to just know the position they are supposed to be in to properly hold the oar, and to keep in time with my team mates.  We're a well oiled machine, each in sync with the other.  And that is a beautiful thing.

Friday, we had a moment that was not so beautiful.  We were rowing along nicely when out of no where, the lionesses at the front of the boat started screaming, and frantically rowing backwards. Those of us in the rear of the boat had no clue what was going on, but we sure felt the effects of it as the boat tipped to the right almost dumping us all into the water, and then it tipped even more to the opposite direction. I thought for sure we were going overboard. We all did. Nothing like this had ever happened before, I had no idea what was going on or why.  It took a few minutes to get settled, and we then saw what the problem was.  The two rowers in the first seat noticed two bricole that were rotted and broken off, only barely visible at the water level because of the height of the tides at the time. We almost hit them. If they hadn't seen them and back paddled quickly, we all would have been in the water. Fortunately, we all were wearing life vests.  I swim, so it wouldn't have been a problem, however there are a couple of lionesses who don't swim.

Happily, most of our rows are non-eventful! 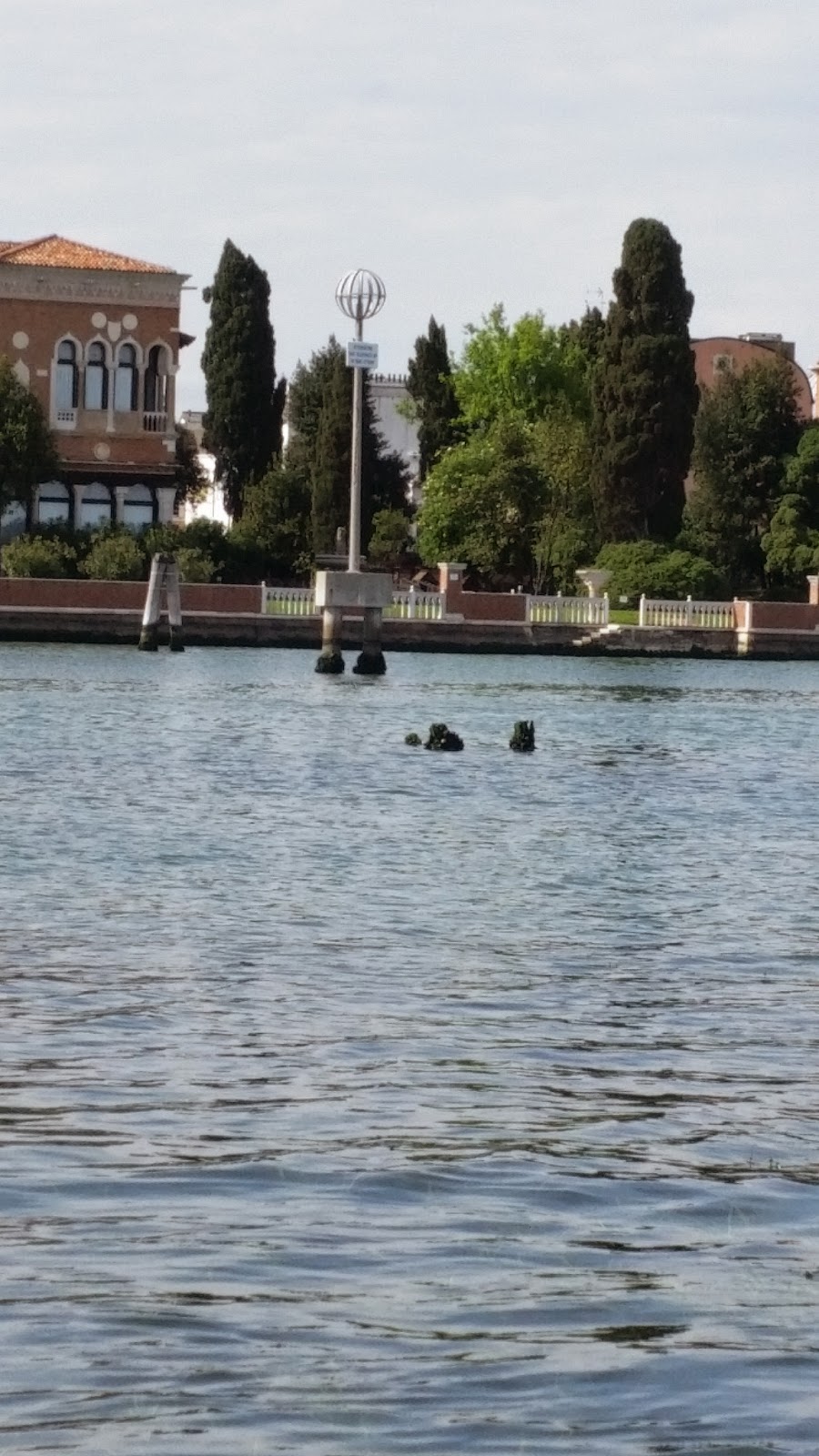 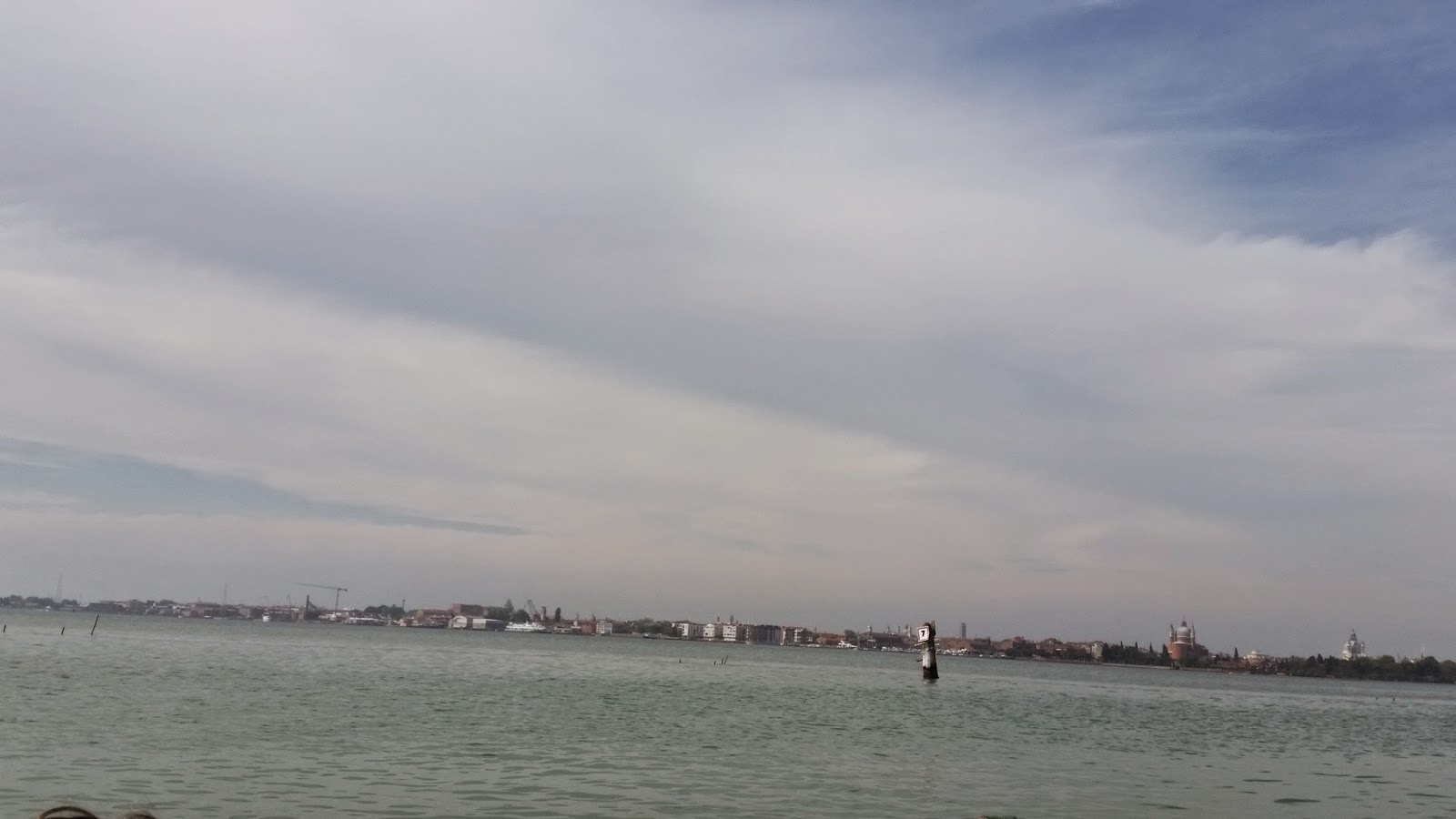 Today's row was without incident. We rowed completely around San Clemente island, a first for us. Usually we row to it, then turn around and row back. You can see from my photo below how clear the water is. It's quite shallow, I can touch the bottom of the lagoon with my paddle. 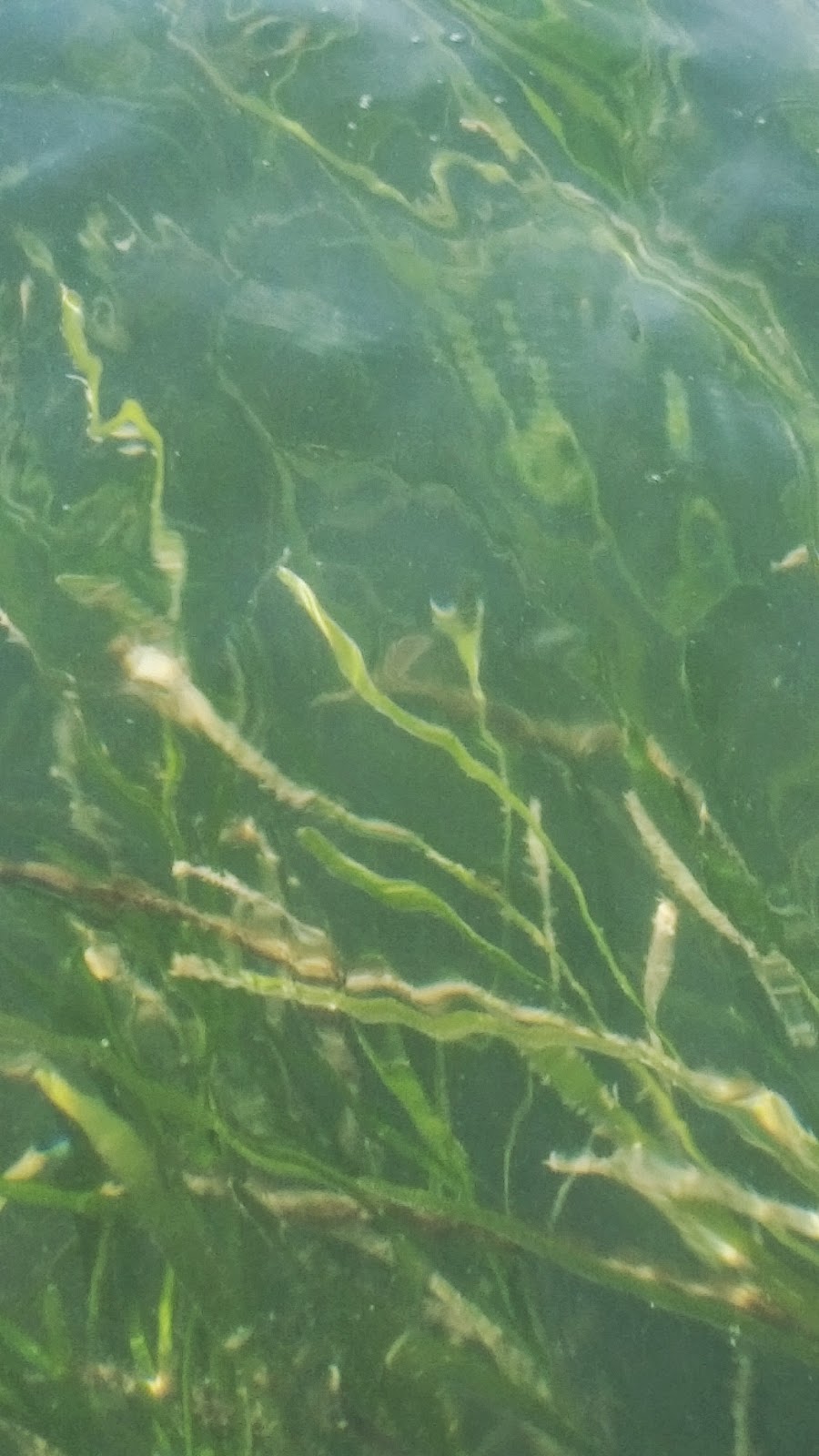 We were quite excited today, as this was the day our brand new salvagente arrived.  Salvagente- here's your new Italian vocabulary word for the day! Salvagente is what you call a life jacket or life preserver.  Salva gente - literally save people.  Here are the lionesses in them.  Wow, what a difference these make. Our other salvagente were quite bulky and uncomfortable. These new ones are cut very differently under the arms. Their design fits so much better, making rowing a lot easier. We are pretty happy lionesses. Simple pleasures!  And we probably needed those salvagente today. Crossing the Giudecca canal in both directions was trecherous.  Going across, we took on more water than we ever had before. We had to stop and bail out. I wasn't in the boat 5 minutes before a wave hit me and I was completely soaked from head to toe.  Our feet were covered with water by the time we hit the other side of the canal.  On the way back, a tour boat refused to give way to us, even though the "rules of the road" say all motorized boats must give way to any rowing boat.  The guy knew it, but wouldn't stop. We almost hit him. There was quite a bit of loud, nasty words exchanged between our helmsman and that driver. 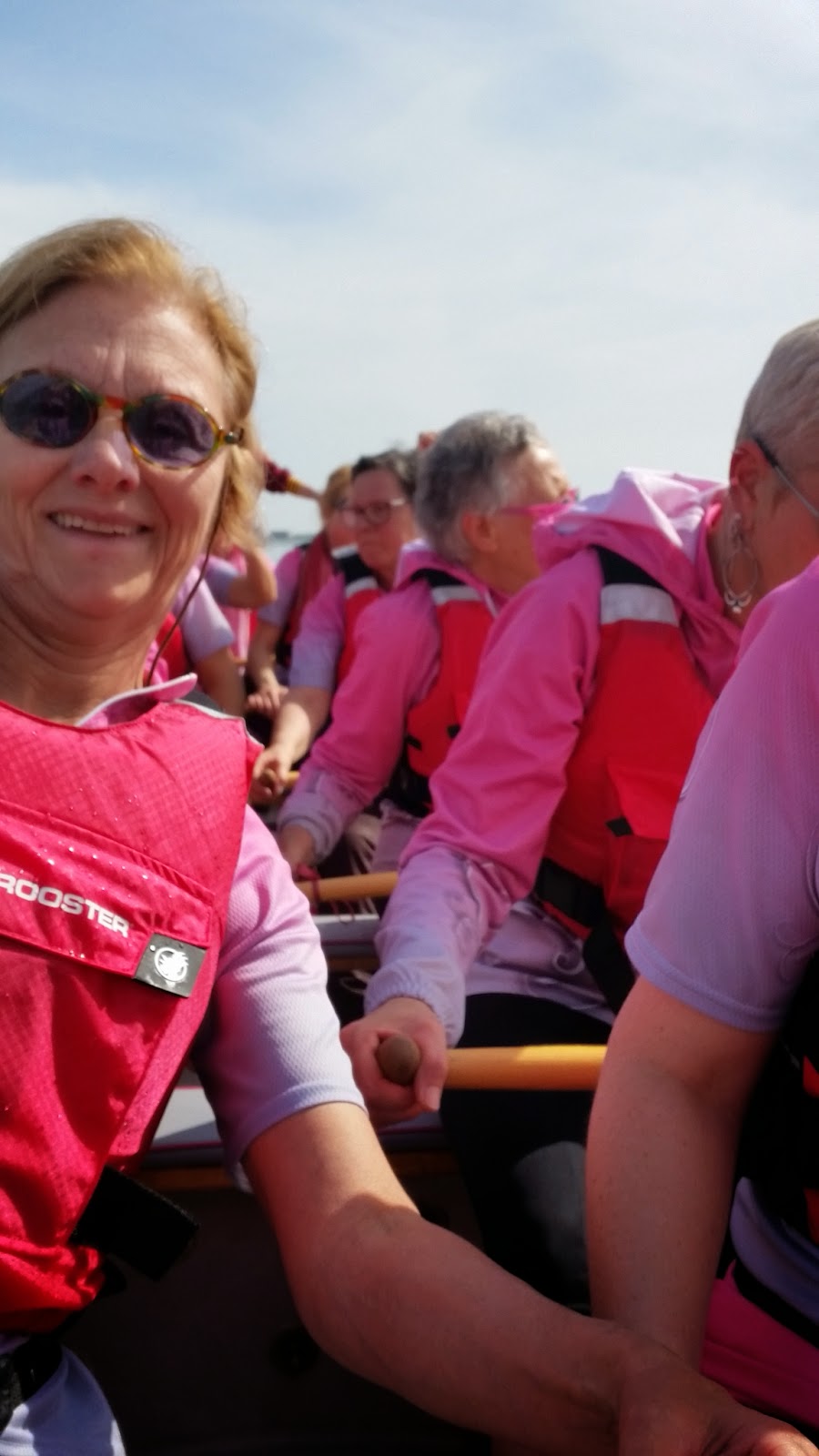 After each row,  the dragon boat gets washed, dried, and stored in one of the old Salt warehouses at the Bucintoro boat club. Then I make my way to the vaporetto at La Salute.  The short walk to the vaporetto is absolutely joyful now that the weather has gotten warmer. The local  kids are out playing in the campo around the corner from the boat house. Today the boys had a game of soccer going on, 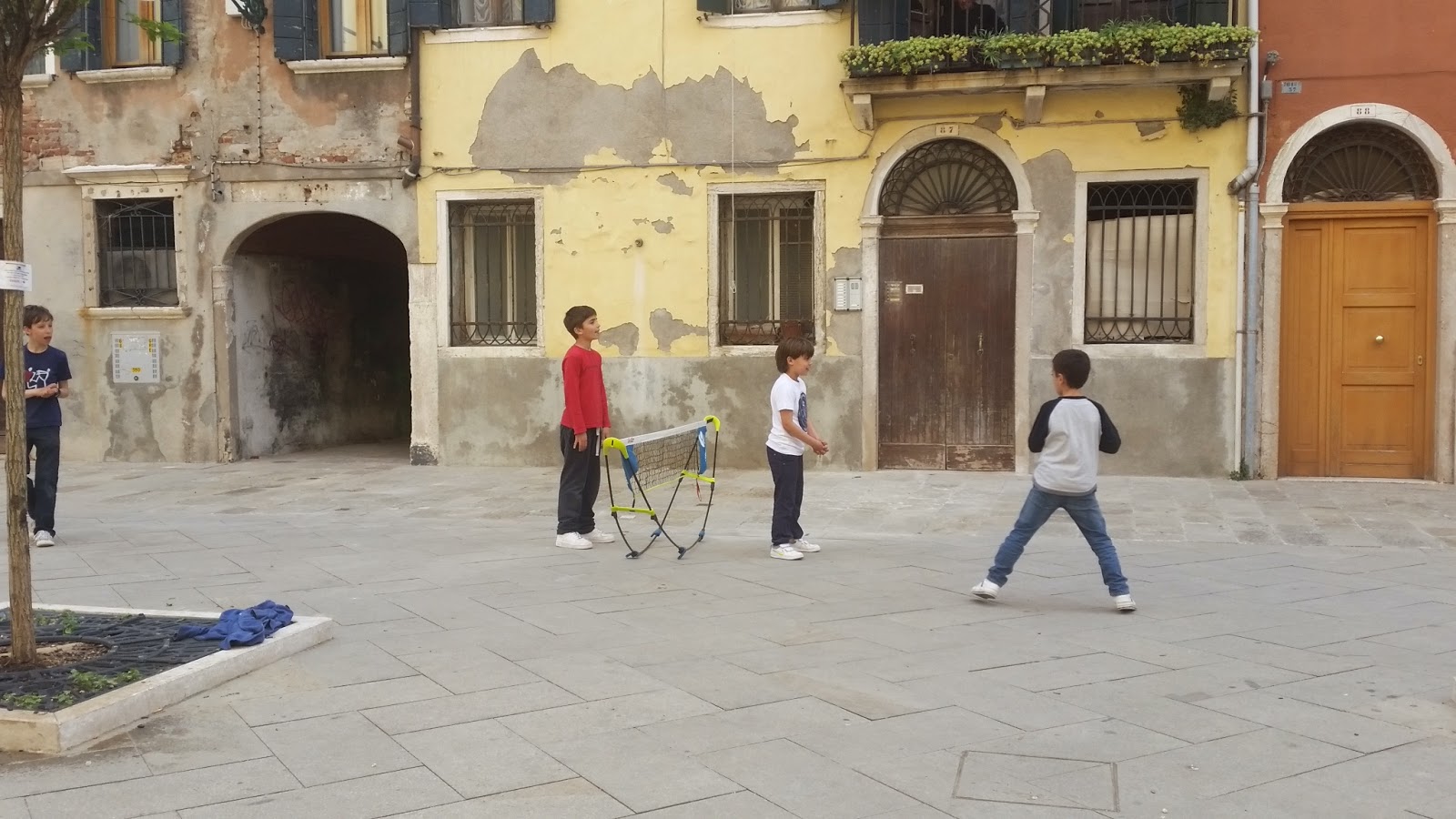 The girls were giving their sidewalk chalk a work out, 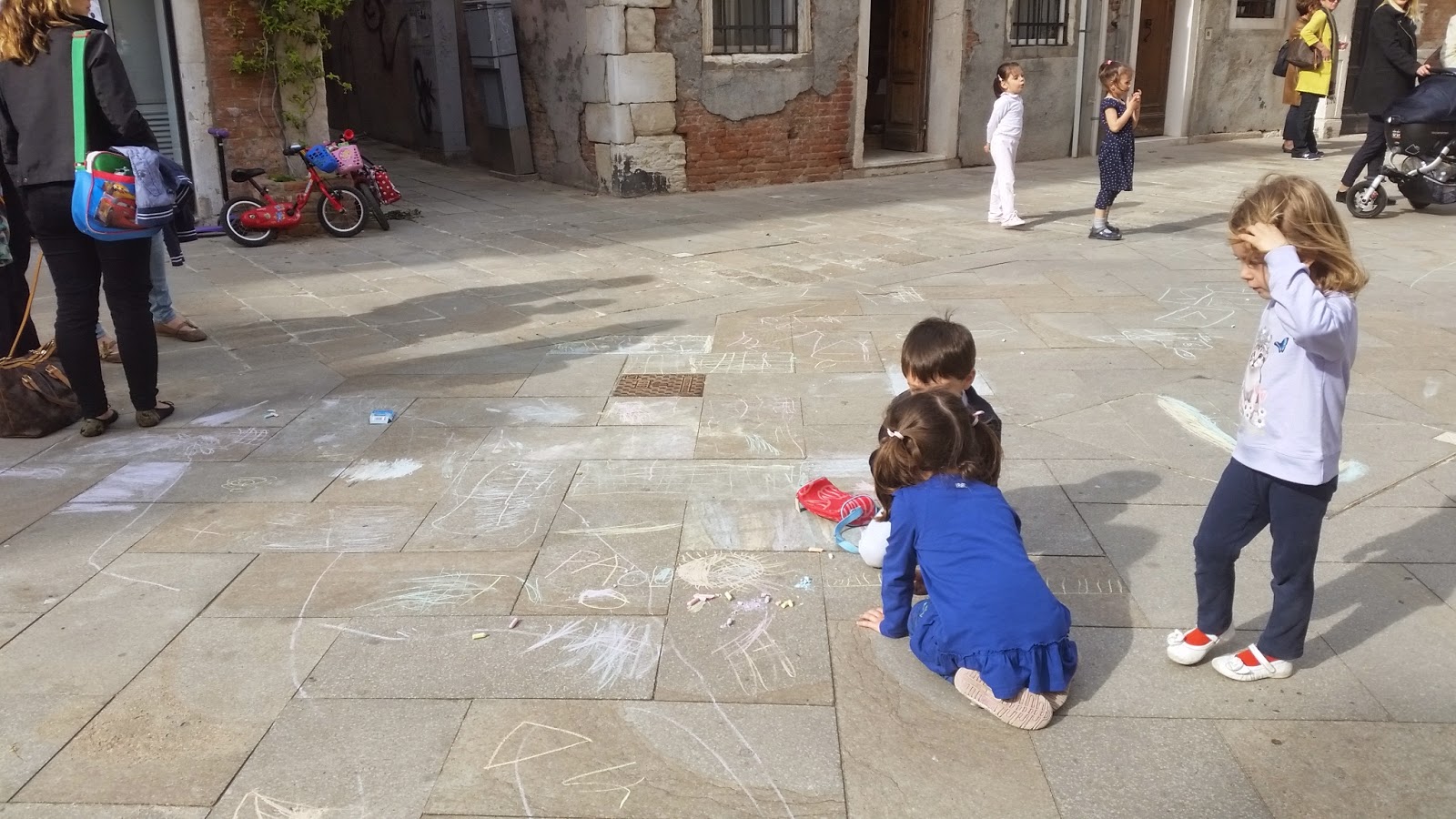 and the priest was giving an outdoor mass for the rest of the kids.  It's a side of Venice  I just love to see. 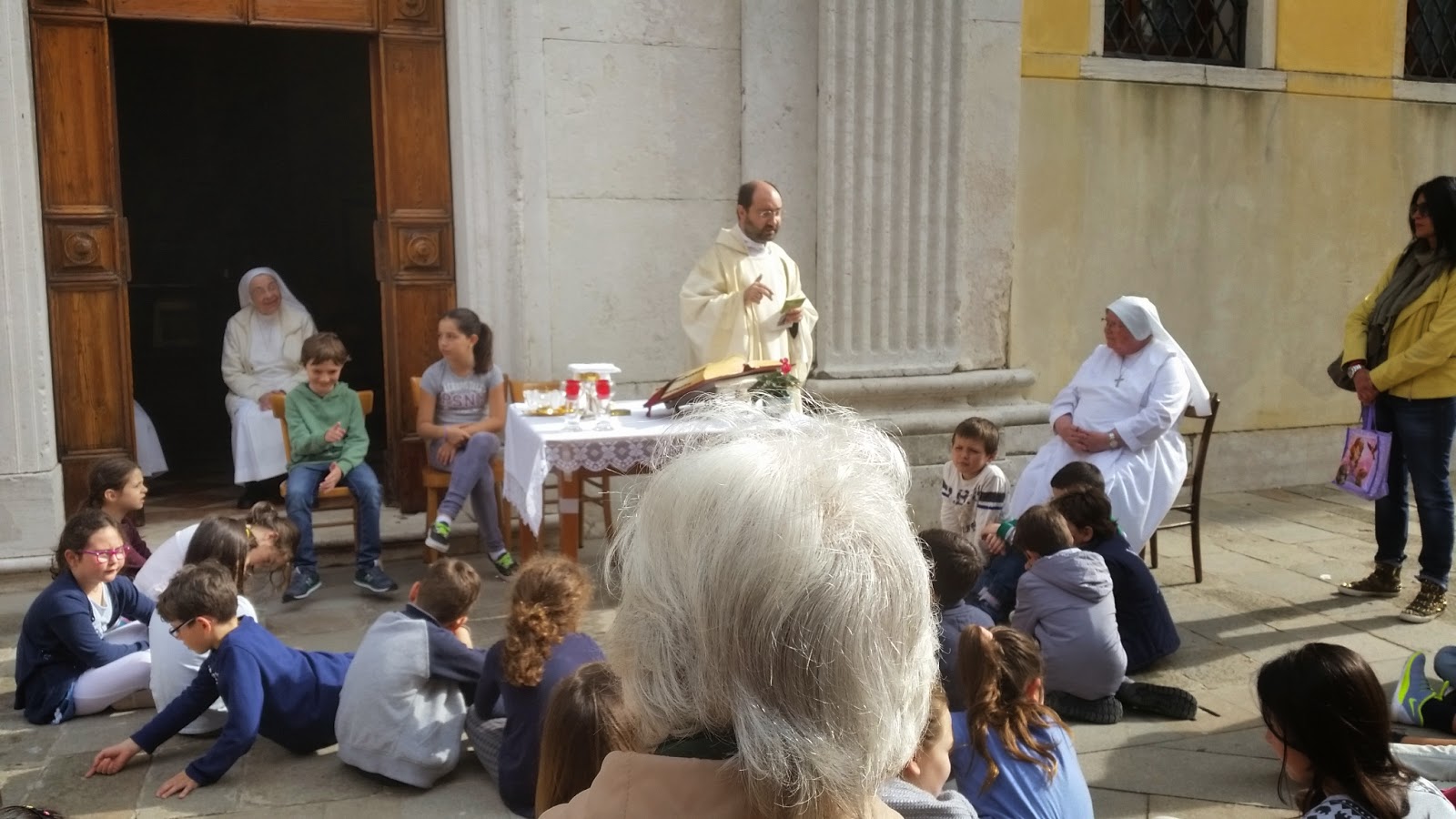 And, around the last corner as I made my way to La Salute, today I was serenaded by these two  who were happily playing on this little dock over the canal. 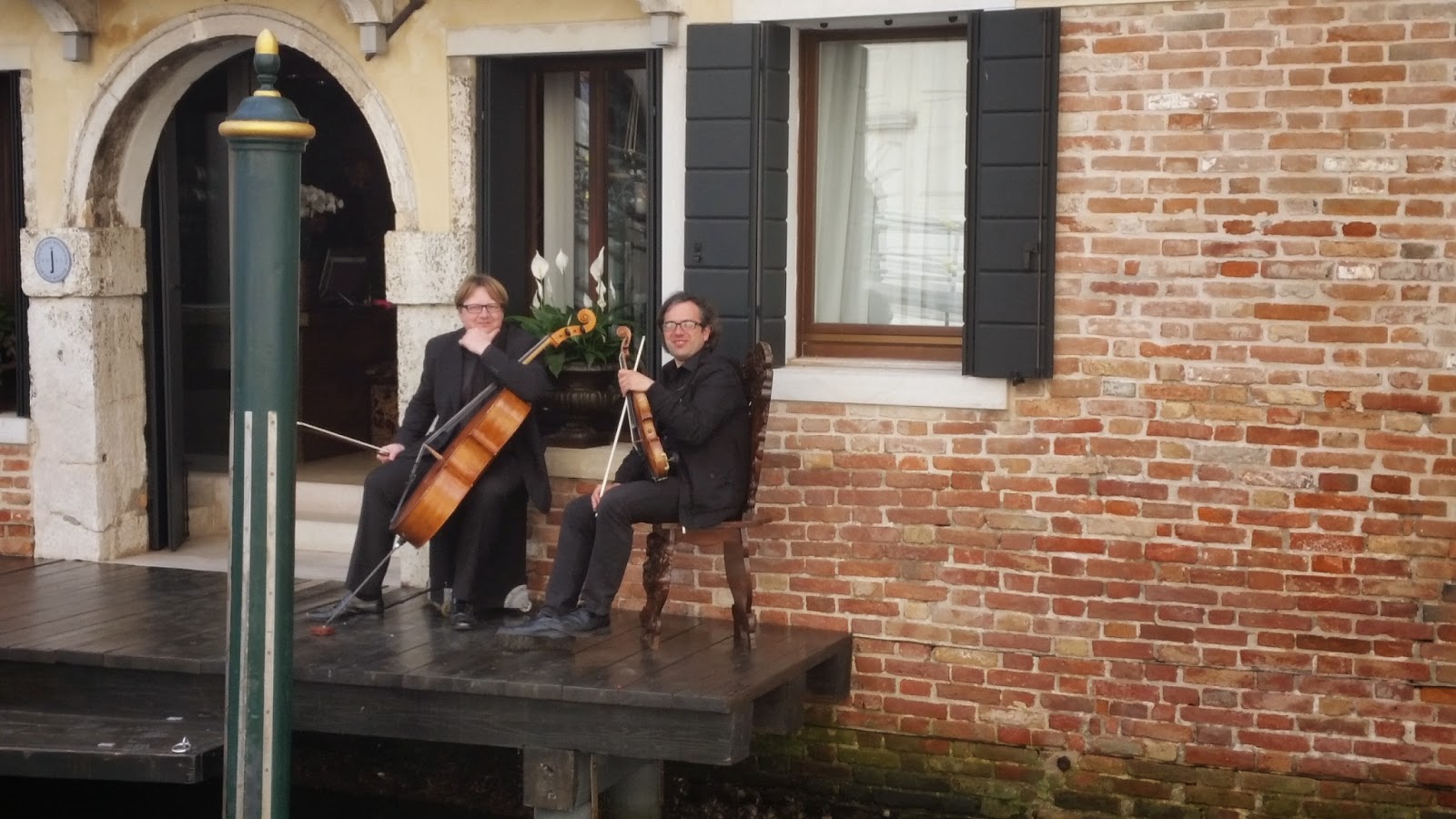 So, there you have it. A bit of my rowing adventures. Not quite all quiet on the southern front, but still all good.
Posted by karen at 6:48 PM 13 comments:

In recent months the local news has been filled with articles concerning Venice's increasing transportation difficulties, including more large cruise ships, vaporettos crowded with tourists, and even new limits on kayaks, canoes and dragon boats. Yes, even dragon boats, so I've been directly impacted by the new regulations our temporary mayor put in place mid-April. Fortunately, those stringent rules have been modified a bit, so soon we'll be rowing back on the Grand Canal.

The other day I witnessed yet another traffic issue. I thought surely this would make headline news the next morning.  Our interim mayor needs to get on this problem before it gets completely out of hand. 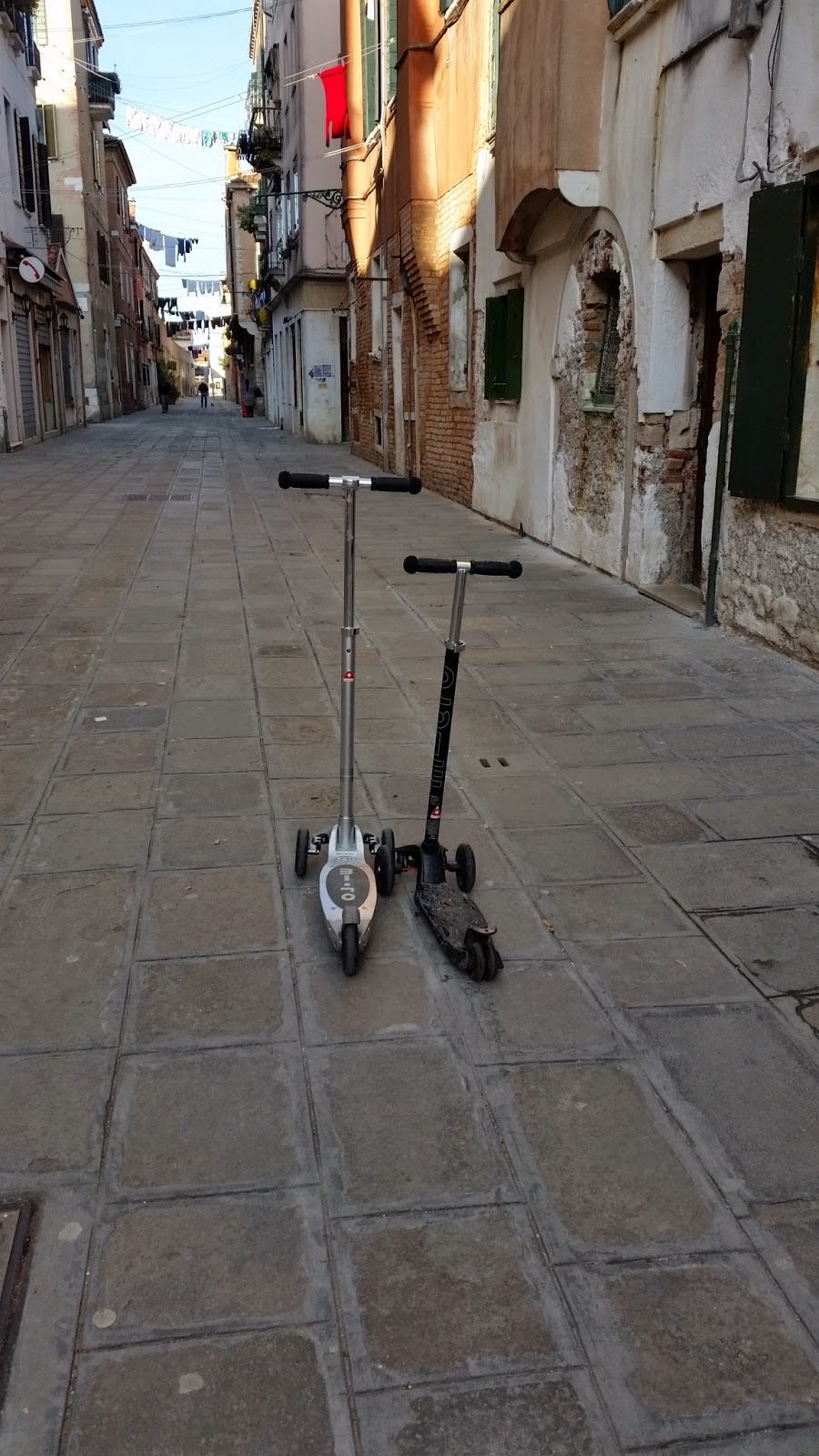 Double parking in Venice.   (It was in front of a toy store, I can totally understand the necessity.)
Posted by karen at 3:38 PM 10 comments: